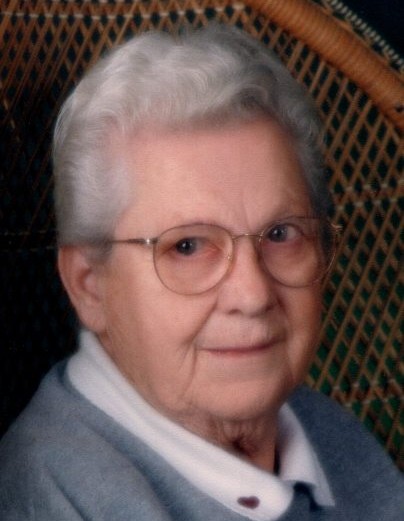 Linnea attended Diamond Valley Schools, graduating from High School with the honor of being valedictorian.  After high school, she went to work at Beech Aircraft.

She married William Matthew Barlow, May 16, 1944, at Herington.  She was a devoted farm wife and the mother of  three children, Scott, Cindy, and Marvin.  She was very involved in her childrens’ lives and taught Sunday School when they were very young.  She was a member of Burdick United Methodist Church.  She went to work at the Lutheran Home when the children were a little older.  She retired after twenty years of employment.  She took an active part in the Burdick Women’s Auxiliary and assisted with the Labor Day activities.

She is preceded in death by her husband, Bill Barlow on May 12, 1987; six brothers and sisters, Elsie Hedstrom, Orpha Umberger, Harvey Hawkinson, Leslie Hawkinson, Chelsea Hawkinson, Donald Hawkinson; and her parents.

Graveside memorial service will be 11:00am, Monday, March 25, 2019, at the Burdick Methodist Cemetery, with Pastor Don Mashburn, officiating.

Memorials have been designated to the Hospice of Dickinson County; and may be sent in care of Zeiner Funeral Home-Herington Chapel, 404 S. Broadway, Herington, KS, 67449-3038.

To order memorial trees or send flowers to the family in memory of A. Linnea Barlow, please visit our flower store.