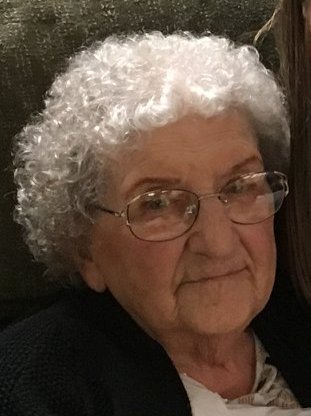 Adeline A. Walter, 98, of Newton went to be with Jesus on November 11, 2018, at Presbyterian Manor in Newton.  Mom was born on a farm in rural Onida, SD on September 8, 1920, to Zack B. and Anna (Wollman) Wipf.  She was the second oldest of three daughters born to her parents.  At the age of 13, her mother died.  Her father remarried, and three more sisters and a brother were born to that union.

Mom attended schools in the Onida area up through third grade and then her family moved to St. Paul, MN where she attended school and graduated from high school there.

Her family was no different than many others during the Great Depression as they were very poor.  Life was difficult, especially for the younger two sisters.  After high school, she did housework for a special lady who, since she didn’t have a mother, taught her many of the things mothers teach their daughters.

Mom and her two sisters, Edna and Lillian, sang trios together for their church even at a younger age.  The church had a radio program, so they often sang on the radio as part of that.  Mom had just one year of piano lessons but practiced really hard because of the sacrifice her mom made to work to be able to pay for the lessons.

Mom was the pianist and soloist for a wedding.  It was at this wedding that she met the groom’s brother and it really was love at first sight.  They were married about two months later on July 19, 1945.  Most of the courtship was via mail as Dad was in the Army Air Corps at the time.  When Dad passed away in January, they had been married over 72 years.

After they were married, July 19, 1945, they lived in Huron, SD for a short while and then moved to St. Paul, MN where Dad attended St. Paul Bible Institute.  Mom worked nights to help put Dad through school.  One of those jobs was at a candy factory, and she would often bring candy home for us kids.

Mom’s calling in life was to be a helpmate for Dad in whatever God led him to do.  She would sign her name as Mrs. Eli J. Walter and almost never as Adeline Walter.  She was his support on the home front.  Having guests for meals or even overnight was not uncommon.

Mom was a great cook.  She enjoyed growing flowers and drawing/painting.  She loved to play the piano and sing until she could no longer do that.  She enjoyed going to all kinds of sporting events especially Berean basketball games.  Her grandchildren and then her great-grandchildren were a great joy to her.  In these last couple of years when her hearing and speech had failed she would be the happiest when her great-grandkids would come to visit her.

We are thankful for the full life God gave Mom.  Not many people live to be 98 years old.

To order memorial trees or send flowers to the family in memory of Adeline Walter, please visit our flower store.