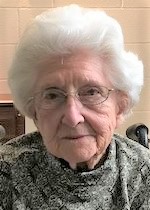 Her family will gather with friends on Sunday, January 10, from 3-5 p.m. at Yazel-Megli Funeral Home, 404 S. Broadway, Herington, KS 67449. A private family burial will take place at a later date. Please sign her online guest book and leave a memory of Beulah at www.ymzfh.com.

To order memorial trees or send flowers to the family in memory of Beulah Alberta Vanderslice, please visit our flower store.