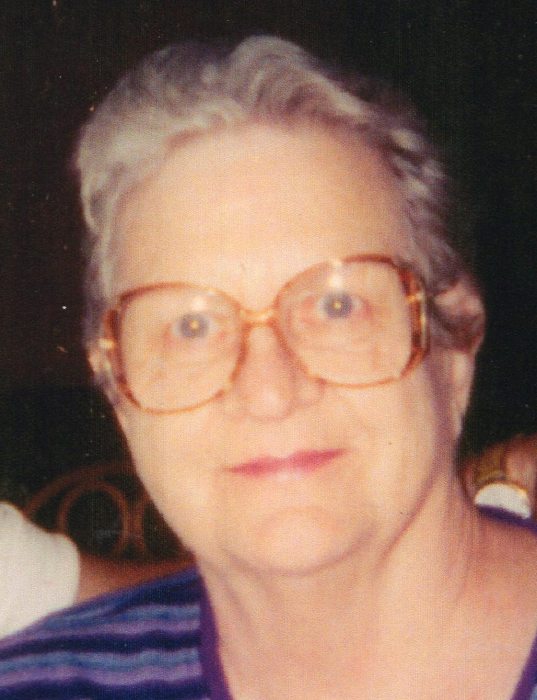 A Celebration of Life Service is being planned for a later date at the St. Paul Lutheran Church, Herington.  A Private Committal Service was held Monday, December 19th, 2016, at the Zeiner Funeral Home, Herington Chapel; and interment was in the Sunset Hill Cemetery, Herington, with Pastor Bill Peterson officiating.

Birdie attended the Herington schools and graduated with the class of 1948.  She was active in school activities, Rainbow for Girls, and attended the Episcopal Church, all in Herington.

Birdie and her family continued to live in Herington where she was a stay at home mom.  She held down several jobs over the years including Paragon Products and Oxandale’s, and was an accomplished seamstress and a super cook.

As a mother she was active in her children’s schooling and when they joined 4-H she served as clothing leader and taught many local girls how to sew.

In her “younger” years, Birdie was very active in a local bowling league and helped take her team to the State Bowling Championships several years in a row.

Birdie was an avid reader her whole life and also enjoyed all kinds of card games.  She had a special love for “cribbage” and grew up playing with her mother and father, ultimately teaching her kids, grandkids, and great-grandkids how to play.  She spent many hours in Florida playing the game on her I-Pad.

In later years she did sewing for others, and made many beautiful wedding gowns for family and friends.

In the 1970’s, Birdie and Norman bought into a partnership to own and operate a popular local bar “The Spot” and a private club in Herington.

During this time they had a houseboat on Milford Lake … there were many, many hours of enjoyment with family and friends.  Her love of the water continued throughout her life and at a very young age received the American Red Cross Lifesaving Certificate, but her most proud accomplishments were teaching swimming lessons to both children and adults.

As she got older, her card playing expanded into frequenting the gambling casinos in Kansas, Missouri, Las Vegas, and then finally in Florida.  She also spent many hours, after relocating to Florida, at the VFW at the end of the street playing her favorite slot machine.

Her most treasured moments were spent with her very close family, and annual family reunions helped maintain contact with all of them.  In July she was able to fly to Kansas City for one last family get together.

Birdie lived in Herington until six months after the death of her husband, Norman, when she moved to Florida with her daughter and son-in-law.  She enjoyed the sunshine, and the ocean waves for fourteen months prior to her death.

Birdie was preceded in death by her husband: Norman on April 9, 2015; a sister: Patsy June Miller; a brother Larry Locke; and her parents.

The family requests memorials, in lieu of flowers, to the Alzheimer’s Association; and they may be sent in care of the Zeiner Funeral Home, Herington Chapel, 404 S. Broadway, Herington, KS, 67449-3038.

To order memorial trees or send flowers to the family in memory of Birdie Ann Wooster, please visit our flower store.