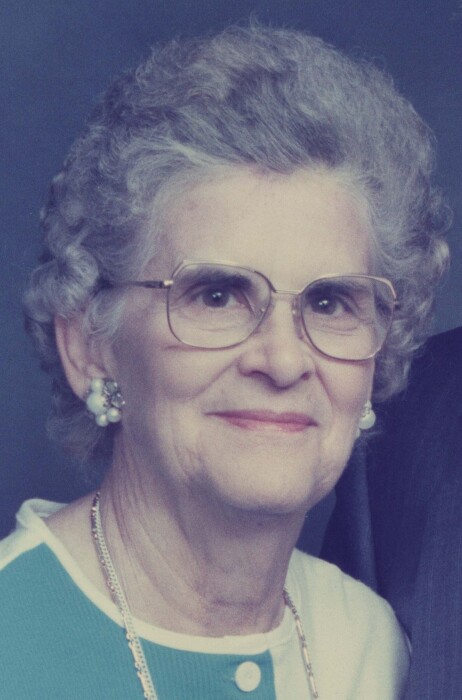 Bula’s life began on September 25, 1916 in Argonia, KS.  She was the daughter of John and Eva (Dine) Wilcox.  Bula was united in marriage to Edward M. Good on December 10, 1939 at the family home in Mulvane.  She was a graduate of the Wesley School of Nursing and met Edward when he was her patient in Wichita.  Edward and Bula moved to his hometown of Marion and Bula worked the majority of her career as a nurse at St. Luke’s Hospital in Marion.  She was a faithful member of the Eastmoor United Methodist Church and the United Methodist Women.  Bula was active in the Coterie Club and the Stitch and Chatter Club.  She was a gifted quilter and had cataloged over 100 of her 100 quilts.  Bula was a Red Cross swimming instructor volunteer and there is even a story of her piloting a biplane in her early years.  Her greatest joy was her family which includes her four sons; Bill (Jane) Good of Littleton, CO, Tom (Cathy) Good of Fresno, CA, Bob (JoAnn) Good of Marion and Mike Good of Springfield, MO; grandchildren Matthew Good, Christopher Good, Brian Good, Micshel Kalkowski, Hayley Caeton, Ethan Good, Oliver Good, Amy Yen, Rebecca Robison, and Laura Good; 17 great-grandchildren and her sister Leila Pennick of Hutchison, KS. Bula passed away on Friday June 26, 2020 at St. Luke’s Living Center in Marion.  She is followed in death by her daughter in law Nancy Good and she is preceded in death by her parents, husband Edward, siblings Burke Wilcox, Paul Wilcox and an infant sister Lucille.  Friends are encouraged to pay their respects and sign Bula’s memorial book on Sunday July 5, 2020 from 2-6 p.m. at Yazel-Megli Funeral Home, Marion.  Funeral services will be held on Monday July 6th at 10 a.m. at Eastmoor United Methodist Church.  She will be laid to rest next to Edward in Marion Cemetery following the service.  Memorial contributions in Bula’s name may be directed to the Marion Senior Center.  Please sign her online guestbook and leave a memory of Bula at www.ymzfh.com.

To order memorial trees or send flowers to the family in memory of Bula Ruth Good, please visit our flower store.