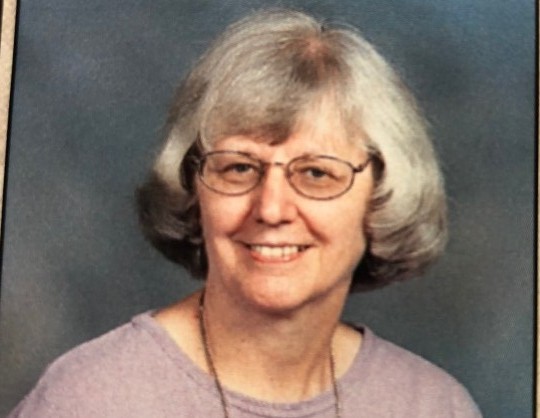 Carol Ann Claassen, 74 of Potwin, passed May 24, 2018 at Wheat State Manor in Whitewater.  Carol was born to John Charles and Violet Ann Most McCullough on December 23, 1943 in North Platte, NE.  She was the fourth of nine children.  She enjoyed being part of a large family.

Carol attended high school in North Platte and was one of the top ten students in the graduating class of 1962.  She then enrolled at Grace Bible Institute in Omaha, NE, majoring in Sacred Music.  She remained fond of religious music, especially choirs and quartets, throughout her life.

Carol married Glen Claassen on November 28, 1964 in North Platte, NE.  They moved to Topeka, KS where Glen worked for the Kansas Office of Vital Statistics.  In 1966, her favorite son, Scott, was born.  After Glen finished his alternative service, they moved to rural Potwin where Glen farmed with his father and brother.  Carol learned the life of a farm wife.  Her favorite daughter, Michelle, was born in 1967.

Carol lived a life of service to others.  She was reserved around people she did not know very well and expressed her affection for others through deeds rather than words.  She was unassuming, working quietly but diligently in the background.  Carol noticed tasks like dishwashing, clothes mending or meal preparation that needed to done and did them without any expectation of thanks. She served on the Willing Workers Project Committee for many years.  She also volunteered in the church library for many years, checking out and shelving books.  Her volunteer work with World Impact started in the 1990's with their fundraising garage sales and continued with the Second Blessings Thrift Store.  After Glen's death in 2001, she spent more time at Second Blessings, continuing her volunteering until the week before her death.

Carol gathered tidbits of information from those around her and stored them away until she could use that information.  This might result in a favorite candy in her candy jar, a book that had been mentioned months ago, or a thoughtful gift for a birthday.

She had a particular fondness for children, starting with caring for her younger brothers and sisters.  Carol taught the 2-year-old Sunday School class at Emmaus for about 25 years.  She was especially fond of her grandchildren and grand nieces and nephews.

To order memorial trees or send flowers to the family in memory of Carol Ann Claassen, please visit our flower store.