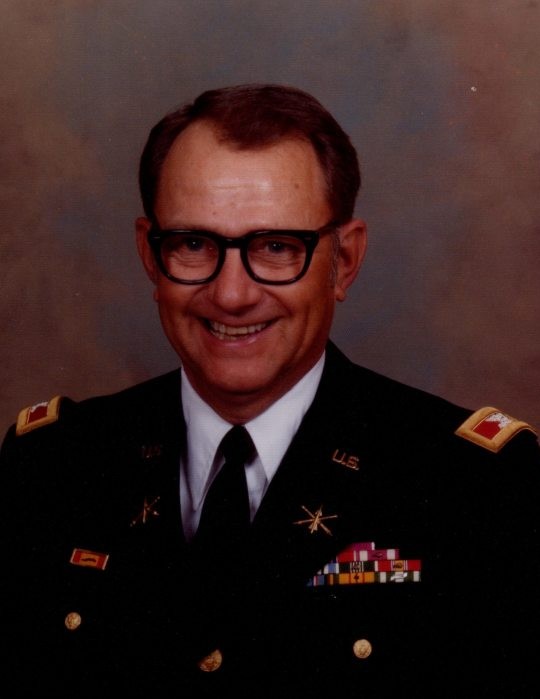 Committal Service will be held at 10:30 AM, Thursday, October 4, 2018, at the St. John’s Catholic Cemetery, Herington, with Rev. Peter O’Donnell officiating.  He will be laid to rest next to his loving wife, Ann.  Full military honors by the Fort Riley Honor Detail.  The family will receive friends Wednesday evening from 6:30 PM until 8:00 PM at the Zeiner Funeral Home, Herington Chapel.

He is survived by a son E “Rusty” Lynn Alvey, II, and his wife Sheri (Lang) Alvey, a brother F. “Hamp” Hampton Alvey and his wife Martha “ Doodie” (Rion) Alvey of Columbia, SC, and many nieces and nephews.

He was baptized at Sudley United Methodist Church, Manassas, VA.  He grew up on the family farm, and his parents owned and operated the Alvey General Store in Catharpin.  His mother Pearl Alvey was also Post Mistress in Catharpin.  As a boy Lynn enjoyed hunting and fishing along Bull Run Creek, where he developed a passion for turkey hunting that stayed with him.

Graduated from Osbourn High School in Manassas, VA, in 1945, and was voted most athletic and most handsome by his classmates.  He enjoyed playing football in high school.  Helped on the family farm and in the general store, his three (3) older brothers were serving in WWII, and most of the employees were also serving in the service he assumed more responsibilities.

He graduated from Virginia Tech with a BS Degree in Business Administration in 1950, and served as a cadet in the ROTC.  After graduation he returned to Catharpin to work on the farm and in the store until his enlistment in the U.S. Army in 1954.

The family moved many times during his military career while he was stationed across the globe, and during his 18 months while serving in Vietnam.  He received the Bronze Star while serving in Vietnam.  He was promoted to Colonel while serving at NORAD in Cheyenne Mountain as an Air Defense Artillery Officer.  He was offered the opportunity to further his military rank, but chose not to pursue it for his family’s sake, and his wife and son wanted to return to Herington, so he found a position at Fort Riley until his retirement in 1980.

Colonel Alvey was known to the farmers around Herington as an avid bird hunter. He requested and received farmers’ permission to hunt on their land, and during Christmas time those landowners knew that the “Champagne Colonel” would be hand delivering a bottle to them.

A superb golfer and a member of the Herington Country Club, participated in area golf tournaments, and had two holes in one (once during a tournament).  Enjoyed playing bridge with his wife and friends.  His hobbies included boating, fishing, and camping with family and friends.  He also enjoyed daily treks to his son’s farm where he would tinker on his old tractor.

He was a member of the Birthday Club, the Burdick American Legion Post 147, and a life member of the Virginia Tech Business Fraternity (Alpha Kappa Psi).

He suffered with painful physical ailments for years, but maintained a cheerful demeanor during his long convalescence.  Known for his startling blue eyes and his positive, flirtatious personality.  In his health days he was charismatic with a commanding presence, even his voice could make you stand at attention (called his Colonel voice).  He must have been a great boss and a role model, because some of the soldiers who served under him have made special efforts to stay in touch or renew contacts with him.  Colonel Alvey was a leader among men and a true kind Southern Gentleman, and will be sorely missed.

To order memorial trees or send flowers to the family in memory of COL Lynn Alvey, please visit our flower store.