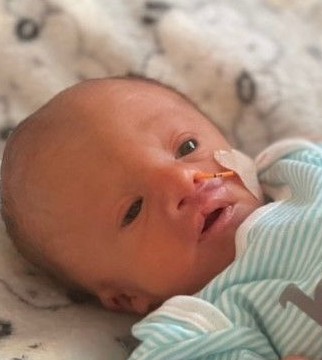 Cooper Allen O’Bray was born April 15, 2022 on Good Friday at Children’s Mercy Hospital in Kansas City, Kansas to Rachel Amiot Thompson and Matthew O’Bray at 12:54am at 3 pounds 11 ounces and 15 inches long.

At 12 Weeks and 2 days gestation Cooper was diagnosed with Trisomy 18, also known as Edwards Syndrome. At 20 Weeks gestation Cooper was also diagnosed with HLHS (Hypoplastic Left Heart Syndrome) Meaning Cooper had only his right side of his heart, this diagnosis is terminal. With each week Cooper continued to grow and defied all the odds that the doctors gave his mom and dad. At 36 weeks and 1 day mom and dad relocated to the Ronald McDonald house in Kansas City. On April 13th, Cooper's mom was diagnosed with preeclampsia and admitted to the women's fetal health floor at Children's Mercy. The morning of April 14 induction to Cooper's birth was started. After 30 hours and 54 minutes Cooper joined this world with his mom, dad, siblings, and grandparents on April 15, 2022, at 12:54pm at 3 pounds 11 ounces and 15 inches long.

Cooper's Family were prepared and praying to get time with Cooper before he passed away, because all the doctors told them that Trisomy 18 is “incompatible with life” and add HLHS, that Cooper would not survive after birth: if he survived birth. But at 12:54pm Cooper was breathing! HE CRIED! He was placed on his mom's chest, and he looked up at his mom and he continued to breathe. Cooper defied the odds, he survived birth and he lived! Blood was taken from the umbilical cord for Genetic testing. Cooper was to have no pain, no needle pokes, only love and peace. Cooper was baptized with his family at his side.

After his birth they were moved to a regular room where many doctors came to see him. Cooper had a right cleft lip, however, miraculously it healed in the womb. His pallet was intact which allowed him to breath and take milk from a bottle.

Cooper was born with 2 clubbed feet and the softest rock bottom feet. Both hands were clenched and clubbed but he could move them, and they caused no pain. (These are common soft markers found in ultrasounds to diagnose Trisomy-18 which occurs in 1 in every 5,000 pregnancies).

At one day of age Cooper received a cardiac echogram of his heart, where it was found that the PDA (Patent Ductus Arteriosus) was enlarged at 0.63cm. The Cardiologists told us that with this, they could give us 2 weeks of life. If Cooper passed before 2 weeks it would then be a Trisomy 18 relation such as Apnea, but they also said he could live up to 2 months. 24 hours after Cooper's birth, Mom, dad, and Cooper headed home from Kansas City, 2.5 hours to Herington, Kansas. To spend his time home with family. Cooper came home under the care of Dickinson County Hospice.

Cooper fought each day to spend time with his family and for 33 days, he was home with someone 24/7, Cooper was never alone and never knew pain, only love. While very small at 3.5 pounds, Cooper received a NG tube at Wesley Childrens on April 19th at 4 days Old, as Cooper started to decline in oral bottle feeding, He was just too small. With the NG tube Cooper regained his Birth weight of 3 pounds 11 ounces and enjoyed his “droplets” of milk by mouth (With his precious kissy lips). Cooper Breathed on his own until May 4th. He was 19 days old when he developed sleep apnea/ central apnea and oxygen was used and he was ok.

Cooper's family cherished every second of their borrowed time from God, providing memories for Cooper and family to last a lifetime. Cooper enjoyed meeting the Easter bunny by Rachel Barnes. He met Santa Clause thanks to Mr. Hirsch. Cooper was home loving on mommy for Mother’s Day. All of his grandparents were able to meet him, not only once but twice. He enjoyed a 1-month Birthday party with his family and both sets of grandparents. He got to enjoy a little bit of frosting from his birthday cupcake and birthday cookie. He looked at his big bright candle while he was serenaded with “Happy Birthday”. Each morning mommy and Cooper read stories and mommy took thousands of pictures. Cooper even celebrated with his big brother, Presley, as he graduated high school. So many cherished family events and memories were spent with cooper.

Cooper Gets His Wings

On the afternoon of May 18th, Cooper developed pulmonary Hypertension as his PDA was closing. His family snuggled him and gave him so much love and cherished those last fighting moments as Cooper peacefully closed his eyes and went to be with Jesus on May 18th,2022 at 10:41 pm at the age of 33 days 9 hours and 41 minutes of life. Our sweet boy, who was told we may get a few minutes, or he would probably be born sleeping, gave his family almost 802 hours of glorious, treasured time together.

Cooper will forever be known as “Mighty Mouse” because when he stretched his arms, he would stretch his right arm all the way up and his left arm down, He looked like Mighty Mouse. However, being so small he truly was a fighter just like Mighty Mouse. Cooper touched the lives and hearts of not only his family and friends, but the lives of so many people all over the world through his mom’s online support groups; Trisomy 18, Soft and from Diagnosis to Delivery. An extreme amount of love from his Herington Community and friends of family all over the United States. He will never be forgotten. He truly blessed so many people giving hope, joy, love and wrote his own story.

Cooper is preceded in death by his great grandparents Jackie and Theodora Thompson, Erwin and Rose Heuer, Alfred and Theresa Morgan, and Florence Sanders and Gerald O’Bray

Graveside services will be held at a later date at the Evergreen Cemetery in Stockholm South Dakota for family and Friends.

A Special Cooper O’Bray Memorial fund was set up under Rachel Amiot at Central National Bank of Herington.

Cooper's family would like to say thank you to everyone who prayed and supported the family throughout Cooper's wonderful and glorious life, he truly was a Trisomy-18 miracle, and he was truly loved by all, and he was able to receive and give love to so many in his short 33 days of life. During his brief visit on earth, Cooper enjoyed listening to music, his mother singing to him, morning story time, being held close by his parents, siblings, family and friends. He was loved by all who met him and will be greatly missed.

Mom and Dad’s Letter to Cooper

Fly high sweet baby boy cooper you have gained your Angel wings and will forever be missed. We will see you again someday; you will always be our little sunshine; you are my sunshine! A sweet diamond in the sky. Rest in heaven precious Angel you are proof that angels can live here on earth. We are so grateful God picked us to be your mommy, daddy, and family. Thank you, Cooper, for letting us love you and for loving us with all your pure unconditional love. -Love mom and dad

I will not forget you, for behold, I have written your name on the palms of my hands -Isaiah 49:15b, 16a

To order memorial trees or send flowers to the family in memory of Cooper Allen O'Bray, please visit our flower store.