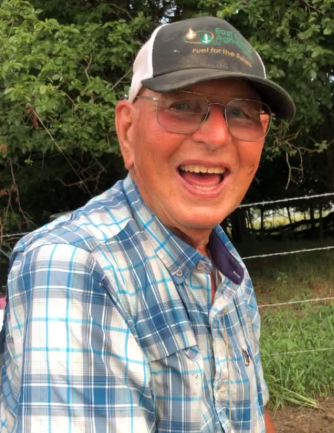 He set the first stake in the prairie. That’s what my dad always told people about Circle E Feedlot. The feedlot was his life for six decades. Work for my dad was something of a religion. He poured himself into every project he undertook. Many times I’ve seen him come up with an idea, draw it out, go to the shop and make it, and then install it. Beyond these more creative endeavors, he liked “getting the job done.” He knew how to do a lot things: welding, plumbing, carpentry, heavy equipment. The list goes on. Much of this work was dangerous. He didn’t always escape those dangers, but injury or illness did not stop him. Even after he supposedly “retired” in the early 2000s, he still “consulted” at the feedlot, now named Windmill Ranch. He was working there as of several weeks ago, before his final decline began.

Anyone from Potwin and surrounding areas knows that he worked tirelessly for the community as well from the early 1980s onward. I found this somewhat of a surprise at first. Early in his life, dad had never been outgoing, but in 1981 (as I recall) the feedlot changed hands. We had been living on land the feedlot owned, and in a matter of a couple weeks, my parents were cast out of the country and into the metropolis of Potwin. I figured dad would hate it, but Potwin became another project. He got himself elected to city council in short order, and then he became the mayor. He’s been in that job for thirty-three years. Beyond that, he joined the Lions Club. Bit of a shocker there. But of course he threw himself into that as well, eventually becoming a district governor in the late 90s. Then there was Kansas Pride, Plant a Row, and who knows what else.

Work and community occupied much of his time, but fishing took up the rest. And for him, fishing was work. He loved crappie fishing and limb lining for channel and flathead. If all else failed, he’d catch a bunch of tiny bluegill. Anything to “stretch the line.” Of course he could not just pursue the sport; he also started up a custom crappie jig business. In the 1970s, he operated a fish farm for several years on top of all the work at the feedlot. He also enjoyed other outdoor stuff: camping, gardening, and hunting (early in life).

Dad grew up rural, Mennonite, and poor. Much of his life went to overcoming that. I think he probably wished he had more children, but my parents could not have them. I was it. But he gave me all the time he had. The same goes for my mom. He loved her more than anything, and her passing in 2015 knocked him down in a way he could not fully beat. He’s with her now, probably organizing some new project.

Dean’s life began on April 1, 1938, the son of Alfred and Alma (Boese) Schmidt near Galva, Kansas. He married Vera June Unruh on April 22, 1956 at Eden Mennonite Church in Burns, Kansas. They enjoyed almost 59 years together before her passing in March of 2015.

Dean worked most of his adult life at Circle E Feedlot near Potwin, retiring as Operations Manager. He served as the mayor of Potwin for 33 years. He enjoyed memberships with the Lions Club, Kansas PRIDE, Plant a Row for the Hungry, and numerous governing boards in Butler County.

He was preceded in death by his parents; wife, Vera; and a brother in childhood, Warren. Dean passed away peacefully on Friday, October 9, 2020, at the age of 82 years old.

His family will gather with friends on Tuesday, October 13, from 6-8 p.m. at Lamb Funeral Home, 120 S. Main, Whitewater. There will be a private family graveside. On Wednesday, October 14, at 4:30 p.m., the family would like to invite the community to a memorial gathering at the outdoor Lions Club shelter at 201 N. Miller, Potwin, Kansas for fingerfood and fellowship.

Memorial contributions in Dean’s name may be directed to the Potwin Lions Club in care of Lamb Funeral Home, P.O. Box 358, Whitewater, Kansas 67154. Please sign his online guest book and leave a memory of Dean at www.ymzfh.com

To order memorial trees or send flowers to the family in memory of Dean Allen Schmidt, please visit our flower store.