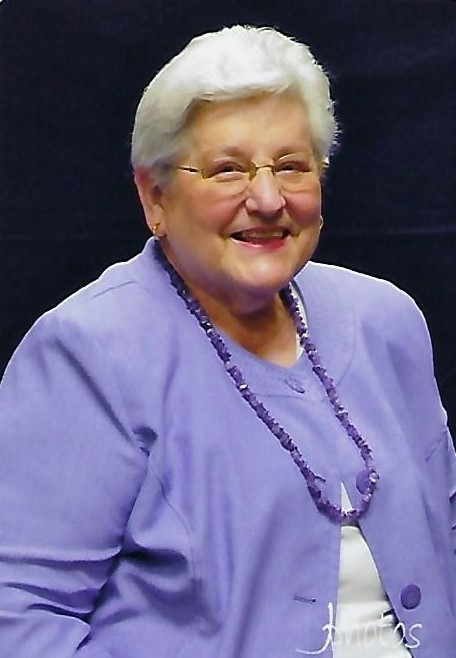 Donna's life began on September 21, 1932 in Marion.  She was the daughter of Orville and Clara (Gaunt) Miesse.  Donna was baptized in 1944 at the Marion Christian Church. Growing up on a farm with only her brothers as playmates, Donna was a tomboy.  She grew up loving horses and riding them was her greatest passion.  In the summer, Donna helped around the house, worked in the garden, gathered eggs, and milked cows.  Saturdays in town was a chance to have fun while her mother sold eggs and cream.

Taking lessons on the trumpet and piano instilled a passion for music.  Donna also took voice lessons and she dreamed of becoming a professional singer.  She was a 1950 graduate of Marion High School and attended Emporia State University.

Donna was united in marriage to James R. Fruechting on October 16, 1955 in Marion and they built a good life over 53 years of marriage.  The couple lived in Washington DC briefly after being married while Jim completed his military service, then they moved to Marion where they resided on several farms, where they raised cattle and chickens.  They moved to town after buying the hardware store and built two houses in Marion.

She was a lifelong member of the Marion Christian Church and involved in all aspects of church including CWF president, program chair and treasurer.  Donna guided the Worship and Scholarship committees for many years.  She sang in the choir and served as choir director.  Donna taught Sunday School and Vacation Bible School regularly and served as the President of the Neo-Century Club for many years.

Donna worked for Marion High School and Farmer's and Drover's Bank after high school.  She loved accounting and worked for her sister Dorothy Varenhorst as the bookkeeper for Van's Clothing Store for many years.  When Donna and Jim bought the Marion Hardware and Gift Store in 1975, she continued to manage the business accounting as well as buy china, crystal, and appliances for the store.  Donna also loved giving microwave cooking classes.

Donna's children, grandchildren, and extended family members were her favorite pastime, she was always interested in their current activities and accomplishments.  Playing the piano, singing, reading, embroidery, crocheting and knitting were also her favorite with many baby afghans and pillowcases as treasured gift.  Donna's favorite activity was to cook for her family, church dinners and bake on Saturday mornings.  She made the best cinnamon rolls, bread, cookies and of course, cake for Jim.  Donna travelled with Jim to many state fairs to sell gooseneck trailers when Jim worked for Hillsboro Industries.  They had a lake home in Bella Vista Arkansas while the girls were growing up allowing them to take short vacations away from the farm.  Other favorite trips took them to Colorado, Wyoming, New Mexico, Hawaii, and Spain.  Jim and Donna enjoyed collecting depression and other antique glassware.  One of Donna's all-time favorite activities was to play pinochle for hours on end with her brothers and extended family.

Donna passed away on July 15, 2020 in Wichita.  She is preceded in death by her parents, husband, brother Marvin Miesse and sister Dorothy Varenhorst, granddaughter Carrie Meredith and many beloved brothers in law and sisters in law and cousins.

Donna's family will gather with friends on Sunday July 19th from 2-7 p.m. at Yazel-Megli Funeral Home, Marion.  Her private graveside service will be held at a later date in Marion Cemetery.  Memorial contributions in her name may be directed to Marion Christian Church or Marion Assisted Living. Please sign her online guestbook and leave a memory of Donna at www.ymzfh.com.

To order memorial trees or send flowers to the family in memory of Donna Claire Fruechting, please visit our flower store.