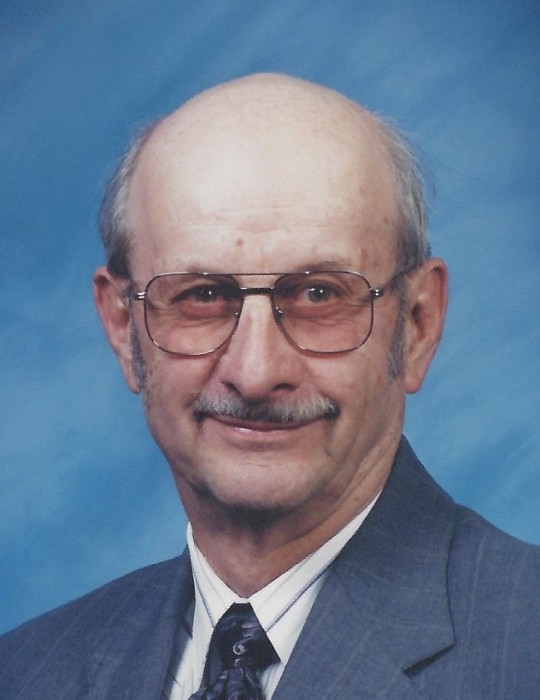 Edgar John Harder was born to John S. and Emilie Harder, on July 22, 1928, at the Bethel Deaconess Hospital in Newton, Kansas. He grew up on a farm near Whitewater, Kansas with his two younger sisters, Linda and Elfrieda. After a long struggle with Parkinson’s disease, Edgar passed away on May 9, 2018, at Wheat State Manor in Whitewater, Kansas.

As a child, Edgar slept in the upper level of their house, under the rafters. He grew up speaking German and did not learn English until 1st grade at Claypool Grade School, where he attended until 8th grade. For six weeks each year, he also attended Bible school in Brainerd, sponsored by Emmaus church, where he studied German and the Bible.

As a child, Edgar’s dad helped him understand salvation, and he accepted Christ as his Savior. He was baptized on May 20, 1945, and joined the Emmaus Mennonite Church

Growing up in the depression, one of Edgar’s favorite childhood toys was a baseball made from a spool, wrapped with string and black tape that he made. He had a special horse named “Blackie” that he taught to “shake hands.” He helped his dad a lot on the farm; when he was 8 years old, he learned to plow with horses.

Edgar served a 1-W term as an alternative to military service, working at Topeka State Hospital from 1952â€’1954. This was a very formative time for Edgar, and he made many friends that he kept throughout his lifetime. For the first year, he rented an attic room with three other young men. He worked side jobs to help meet his basic needs, including at the mill and Sears.

On June 18, 1953, Edgar married Agnes (Wiebe) Harder. They lived in Topeka, Kansas while Edgar finished his 1-W term. Moving back home, they returned to farming and raised their three children: Diana, Kenton, and Stanley.

Edgar loved farming. He worked the land his great-grandfather bought from the railroad for $7.50/acre, after moving from Europe in 1876. Edgar started out husking corn by hand with horses pulling a wagon, and ended by driving a four-wheel drive tractor. He worked really hard farrowing and finishing hogs, and growing wheat, milo and soybeans.

Edgar lived and worked this farm along with his first cousin, Don Harder. Those who watched, often marveled how Edgar and Don were able to work together without using many words to communicate. They knew what jobs needed to be done and worked well togetherâ€’all they needed were a few hand signals, and they knew exactly what each expected of the other. At one time, Edgar and Don had a pasture that wasn’t being used so they bought several buffalo. They stayed in the business until they got tired of the sheriff calling to say the buffalo were out again.

Throughout his life, Edgar had a strong emphasis on church and community involvement. At Emmaus, he served as church treasurer and served on the building committee. He enjoyed singing in the Emmaus Men’s Chorus and the Kansas Mennonite Men’s Chorus at its beginning in 1969. Beginning in 1995, Edgar and Agnes became members of Grace Hill Mennonite Church where Edgar served as a building finance committee member and as the MMA Advocate (Everence) for many years.

Edgar served on the Frederic Remington High School board, the Wheat State Manor board, the Butler Farm Bureau board, the agriculture committee of the Butler County Junior College, and several local co-op business boards. Edgar and Agnes were Butler County Farm Family of the Year in 2001. They also were politically active through the Farm Bureau, often visiting their representatives in the state capitol.

Edgar loved to connect with people, and he seemed to know people everywhere he went. He remembered people’s names and how they were connected. He enjoyed reading and discussing economic models and forecasts. He and Agnes loved traveling; he often celebrated his birthday, in July, outside of Kansas, including in Colombia, South America; Canada; Holland; northern Minnesota; Oklahoma; and California.

Edgar took pride in the achievements of his children, grandchildren, and great-grandchildren. He always enjoyed a rousing game of ping-pong, although after his oldest grandson beat him in a game, he laid down his paddle and never picked it up again.

The family is thankful for the loving care given to Edgar at Wheat State Manor over the past three years. He was always content, and had a ready smile for the nurses.

Edgar will be remembered by many. He is survived by his wife, Agnes; daughter Diana and husband Marlin Thiessen of Burns; son Kenton of El Dorado; and son Stanley and wife Jeanette of Omaha, Nebraska. He had six grandchildren (Carmen and husband Andy Fasnacht, Bradley, Matthew, Travis, and Megan Thiessen, and Jonathan Harder and wife Amanda) and six great-grandchildren (Luke, Paul, David, Samuel, Aiden, and Ellie Fasnacht), and by his sister Elfrieda Harder of Salina. He was preceded in death by his parents John S. and Emilie Harder, and his sister Linda Harder.

To order memorial trees or send flowers to the family in memory of Edgar J. Harder, please visit our flower store.