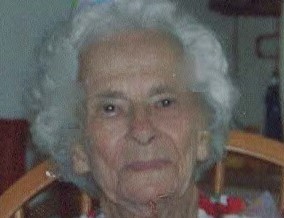 Edna’s life began on July 19, 1914, the daughter of James William and Mabel (King) Fulkerson in Drumright, Oklahoma. She attended Bixler County Schools through the 8th grade and then had to quit school to help run the family farm.  She married Joseph “Scott” Mason on November 27, 1939, in Eureka, Kansas. She was a homemaker and attended Marion Christian Church, enjoyed cooking, baking, and her flower garden. Marie and Scott enjoyed traveling and later after retirement they would winter in Las Vegas.

She was preceded in death by her parents; spouse; daughter, June Rasmussen and a brother, William Fulkerson. Marie passed away peacefully on Friday, February 28, 2020, at the age of 105.

Memorial contributions may be directed to Good Shepherd Hospice in care of Yazel-Megli-Zeiner Funeral Home, PO Box 96, Marion, Kansas 66861. Please sign her online guest book and leave a memory of Marie at ymzfh.com

To order memorial trees or send flowers to the family in memory of Edna Marie Mason, please visit our flower store.