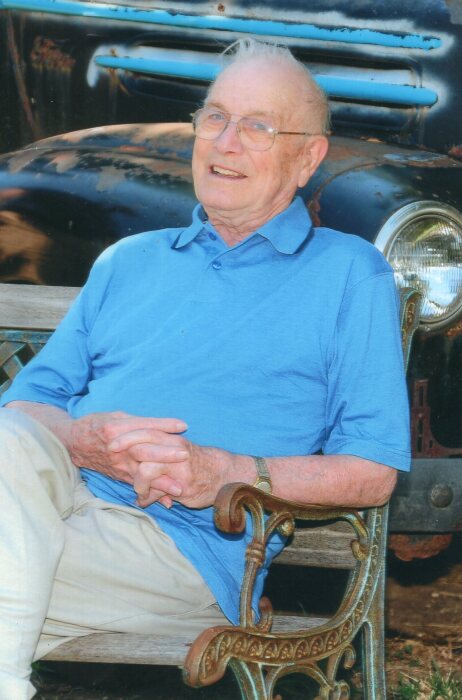 Eldon Gotthilf Weber was born to Adolph and Ida May (nee Chalker) on August 5, 1920 at the family home northwest of Herington.  Eldon was baptized by Rev. L.C Hermerding, Immanuel Lutheran Church, Shady Brook, on August 15, 1920 and thereby was received into God’s Kingdom of Grace.  As a youngster, he attended the Immanuel Lutheran Parochial School and was received into communicant membership with the Immanuel congregation by the Sacred Rite of Confirmation on May 6, 1934.  His pastor at that time was Rev. W.G. Biel.  As a young man, he took-up farming and livestock production on acreage, where he lived, just one-half mile south of the Immanuel Church.  On August 18, 1946 he was united in Holy Matrimony with Emma Winter at Trinity Lutheran Church in Durham, KS.  Two sons, Marvin and Vernon were born to Mr. & Mrs. Weber.

Eldon farmed all of his life and also worked in civil service at Ft. Riley. He was a dedicated Christian, devoted to God, his family and church.  Eldon moved from the family farm at Shady Brook in the early 1990’s to Herington, continuing to be active in farming business. He was preceeded in death by his parents, siblings Milton Weber and Lola Mae Teetzen, and wife, Emma on May 9, 2009.

Eldon moved to the Legacy assisted living facility in 2015 and to skilled nursing care at the Legacy in 2019 where he passed away on December 15, 2020.

Visitation will be held at 1:00pm prior to the service at 2:00pm at Immanuel Lutheran Church, Shady Brook near Herington with Rev. Alan Stahlecker and Rev. Clark Davis officiating. Committal Service follows at the Immanuel Cemetery. Yazel-Megli Funeral Home, Herington is serving the family.  Please sign his online guestbook and leave a memory of Eldon at www.ymzfh.com .

To order memorial trees or send flowers to the family in memory of Eldon G. Weber, please visit our flower store.