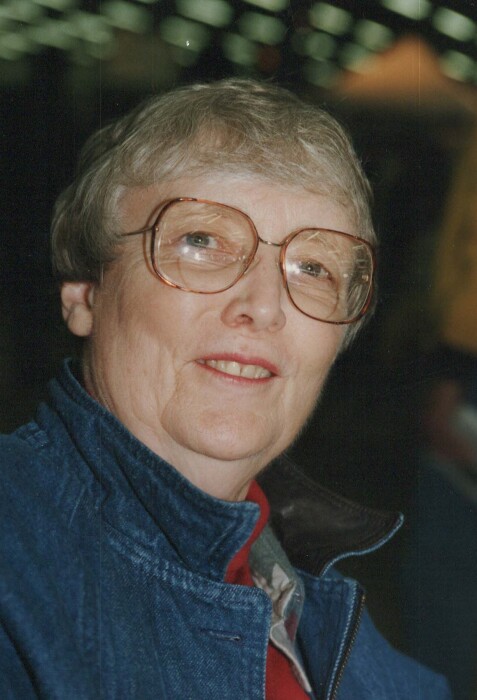 Born October 12, 1931. She left this world peacefully after a long illness on September 2, 2020. Liz and her brother grew up on the family farm in Herrington, Kansas.  Her parents, Louis and Winona Cowman were lifelong residents there.  It was during that time that Liz developed her love of animals, large and small.  She had a great love of rodeos and for many years attended the National Finals Rodeo in Las Vegas with friends from high school and college. A great student, she attended Kansas State University and graduated in 1953 with a degree in computer programming.  She started her first and ONLY job at Boeing in 1953 until her retirement.  During her time at Boeing, she mentored many young men and women who would later become part of the executive leadership team at Boeing.  In a world where company loyalty is harder to find, she was a successful and proud member of her team until her retirement. One of Liz’ great passions were photography.  She also loved gardens and flowers.  For years, her service as a volunteer at Botanica served as her photographic muse and most of Liz’ friends have collections of her beautiful photography on their walls. Liz had a particular love of dogs.  Throughout her early life, she bred exhibited Shetland Sheepdogs in Obedience Trials across the Midwest.  She was very successful.  But it was her last Sheltie, Jiggs, that capped off Liz’ years showing dogs.  Jiggs was her most winning dog and finished ‘Best in Trial’ on numerous occasions.  When Jiggs was older and retired from the ring, Liz began her service to the dog fancier community by volunteering her time and knowledge to both the Wichita Dog Training Club and the Wichita Kennel Club. In the late 70’s she became interested in Miniature Poodles, partnering with her longtime friend, Pat Deshler to increase her involvement.  She not only showed Poodles in Obedience, but also became a partner in the breeding and exhibiting of the Deshler line of Miniature Poodles.  She quite enjoyed the experience and it proved to be quite successful—they bred the winning Best of Show at the 1986 Poodle Club of America National Specialty.  She loved those dogs and continued to have miniature poodles as companions until her death. In 2005, Liz undertook another volunteer project, helping Beth and Jay Tully launch Cocoa Dolce Chocolates.  In her position of cheerleader, grocery runner and chief taster, she impacted the entire staff with her dry wit, funny expressions and all-around good nature.  When she could no longer physically manage day-to-day activities, she continued to support the growth of Beth’s business until Beth lost the business in 2016. Liz is survived by her nephews, Jim Cowman of Kingman, Arizona and Gary Cowman of Griffith, Indiana, as well as hordes of friends from every walk of life.  For all of those who knew Liz, you know she did not want to be fussed about or over.  She chose to forego a funeral and will be buried next to her parents in the Lost Springs Cemetery in Lost Springs, Kansas at a later date.  For anyone that would like to honor Liz and her life, a memorial has been established with the Poodle Club of America Foundation (www.poodleclubofamericafoundation.org) where Liz was a founding member, as well as the Kansas Humane Society (www.kshumane.org). Yazel – Megli Funeral Home, Herington is serving the family. Please sign her online guestbook and leave a memory of Liz at www.ymzfh.com.

To order memorial trees or send flowers to the family in memory of Elizabeth Helen Cowman, please visit our flower store.