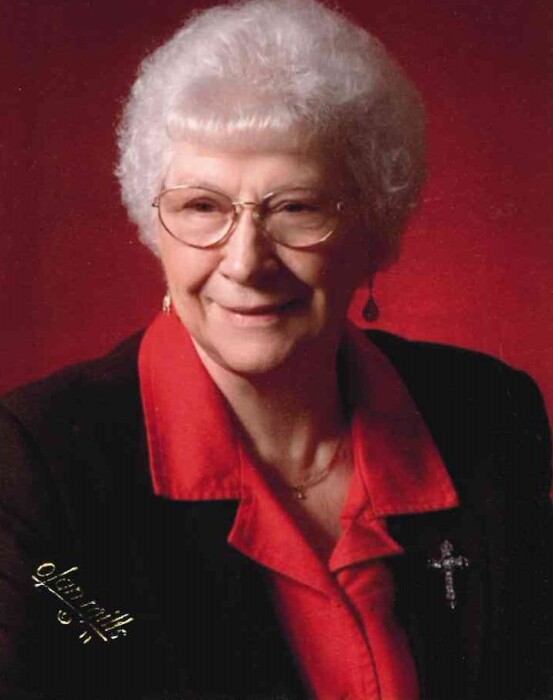 At the request of the family, memorials have been designated to St. Paul Lutheran Church or Hospice of Dickinson County.

She is preceded in death by a daughter Patty Cline in 2020, a son Henry Riffel in 2019, three sisters; Kay Holdridge, Gloria Riffel, Carol Lindsay-Stromgren; two brothers; Bill and Wayne Rutz; one grandson, and two great grandchildren.

Elizabeth Jean given name at birth, but known as “Betty” was born on a farm near Carlton, Kansas on March 18, 1932.  She was the fourth child of Jake and Valene (James) Rutz.  Her older siblings were; Kathryn, Willis, and Gloria, and her younger siblings were; Wayne, Jim, Ray, Carol, Joyce and Shirley.  Betty was a hard worker and high-spirited gal.  She was young began babysitting and helping her aunt and uncle with the birth of triplets.  Later as her Grandma Rutz began to slow down and needed assistance with housekeeping was ready to lend a helping hand.  Growing up in the country with a large family, she learned to garden, cook, bake, sew, mend and help with the care of the younger children.  These skills she learned went with her the rest of her life.

After World War II ended, a US Army soldier visited her class to talk about his tour of duty in the Aleutian Islands of Alaska, this soldier was Melvin A. Riffel; the two met and fell in love, and were married in 1947 until their divorce in 1972. Betty and Melvin raised their first six children in rural Herington area. The children always had inside and outside chores. Betty also had her own chores outside of the raising her children.  For example, every spring there were a hundred chicks to raise and butcher.  Some days Betty would butcher as many as twenty-five roosters a day!  On top of the household and parenting responsibilities, she went to work at the Lutheran Home, which she liked and found rewarding.

Betty and the five younger children moved to Abilene in 1972, when the two youngest children were barely three and a little over a year old.  Betty always believed in the taking care of each other, so while she was living in Abilene, the three older children helped with the care of the younger children. During this time in Abilene, Betty accomplished many goals while being a single-mother and caring for a young family.  To continue her education, she went back to school and received her GED.  She began full-time work at elderly care facilities, where she worked as a CNA, Certified Medication Aide, and cook.  She left a lasting impression at all the facilities where she worked, including Presbyterian Manor, Mid America, Sterling House, Enterprise Estates, and Brown’s Memorial Home.

Betty liked bowling and embroidering.  She embroidered t-towels, pillowcases, and quilts.  She made quilts for each of her children and grandchildren. Betty belonged to the square dance group in Abilene and the Hospice of Dickinson County.  When she returned to Herington in 2002, she became active with the Herington Hoedowners, Hospice of Dickinson County-Herington, Herington Hospital Auxiliary, and several card clubs.

Betty loved life and family.  When times got rough, she got in there and tried harder and became stronger.  She never gave up.  She lived by these words from Philippians 4:13; ‘’I can do everything through Him who gives me strength.”

To order memorial trees or send flowers to the family in memory of Elizabeth J Riffel, please visit our flower store.