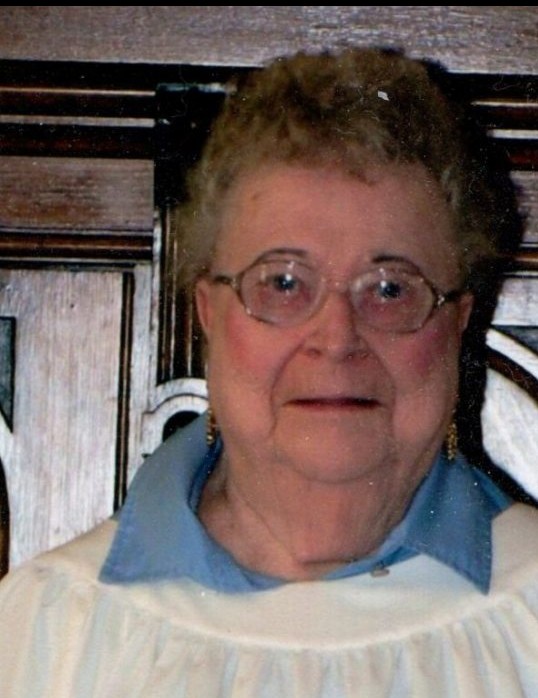 In the year 1931, her father accepted a call to St. John’s Lutheran Church, Missouri Synod, at Lyon Creek, Herington, Kansas. She with her parents, one brother, Wilbur, and two sisters, Grace and Dorothy, moved to Herington.  She attended the Parochial school for eight years.She was confirmed April 15, 1943.  She attended Hope High School, graduating in 1947.  She worked at Robson Pharmacy for a few years.  She taught the parochial school at Lyon Creek for two years and also taught at a parochial school in Canton, Kansas, for a year during World War II.  She attended Brown Mackie Business College in Salina and worked at A. L. Duckwall Store, at Herington, as secretary to A. L. Duckwall.

She began playing for church services when she was 15 years old.  She was the church organist for forty-six years, and was always available to assist for sixteen years.  She was an active member of the church, ladies aid, and Ladies Layman League.

She married Norman Knuth in the year 1954.  They made their home in Herington.  He preceded her in death in 2005. She is also preceded in death by her brother, Rev. Wilbur Klattenhoff; two sisters, Dorothy Knoke, Grace Lietz;  a nephew, Clinton Lietz; and her parents.

She leaves to mourn a nephew, Alan Knuth of Herington; and a niece, Linda Schroer of Wichita,  whom she raised as her own children since they were six and ten years old; a nephew,  Glen Knuth; five nieces, Carol Mullen, Nancy Lacher, Susan Weber, Linda Parmeter, Cathy Delucas, and great nieces, Kylie Schroer, Melissa Kealey, and Amanda Yoder.

The funeral will be held at the St. John Lutheran Church, Lyon Creek, on Thursday, January 3, 2019, at 10:30am, Rev. Walter Gilkey, officiating, with burial following at the church cemetery. Musician for the service will be Melody Williams.  Serving as pallbearers will be Eldred Brockmeier, Jayce Krause, Jeremy Obermeyer, Melvin Jr. Riffel, James Schimming, and Jim Schultz. Visitation will be Wednesday, January 2, 2019, 5:30 – 7:30pm, at Zeiner Funeral Home-Herington.

Memorial gifts are to St. John Lutheran Church, Lyon Creek; and they may be sent in care of Zeiner Funeral Home, 404 S Broadway, Herington, KS 67449.

To order memorial trees or send flowers to the family in memory of Eunice Louise Knuth, please visit our flower store.