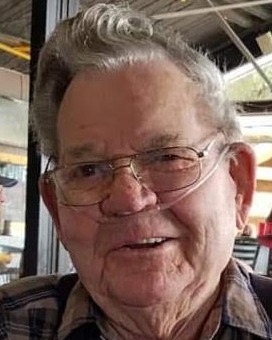 Francis’s life began on September 2, 1931, in rural Marion County.  He is the son of Warren and Bertha (Fergus) Osgood.  He was a 1949 graduate of Matfield Green High School.  Francis served his country in the United States Army from December of 1954 until August of 1956 as a light weapons infantryman in the 2nd Tank Division.  He was united in marriage to Vera Johnston on August 9, 1974, in Cottonwood Falls.  Francis worked for the Chase County Road Commission as a Road Maintainer for 20 years and the KDOT in Marion for 10 years as an Equipment Operator. He was also involved in farming with his brother Lawrence.  Francis was a fun-loving family man who loved his family.  He enjoyed fishing, dancing and traveling in the RV. He was also known to be a bit ornery. His greatest joy was his family which includes his children Kathy (Richard) Ridgely of Tuttle, OK, Brenda Bensinger of Edmond, OK, Carolyn (Gary) Wirtz of Council Grove, Mary (Dan) Eccles of Moore, OK and bonus son, Brian Carlson; 10 grandchildren, 20 great grandchildren and 3 great great grandchildren; his companion Janis Shanklin of Florence and several nieces and nephews.  Francis passed away on Friday January 13, 2023, at St. Luke’s Hospital in Marion.  He is preceded in death by his parents, wife Vera, grandson Branden Bowman, brothers Lloyd and Lawrence Osgood and sister Helen Riggs.  His family will gather with friends from 6-8 p.m. on Friday January 20, 2023, at Yazel-Megli Funeral Home, Marion.  His funeral service will be held at 11 a.m. on Saturday January 21, 2023, at the Florence United Methodist Church led by Pastor Darrin Frazier.  Francis will be laid to rest with military honors in Hillcrest Cemetery, Florence.  Memorial contributions in his name may be directed to the St. Luke’s Hospital Foundation in care of the funeral home.  Please sign his online guestbook and leave a memory of Francis at www.yazelmeglifh.com.

To order memorial trees or send flowers to the family in memory of Francis Vernon Osgood, please visit our flower store.