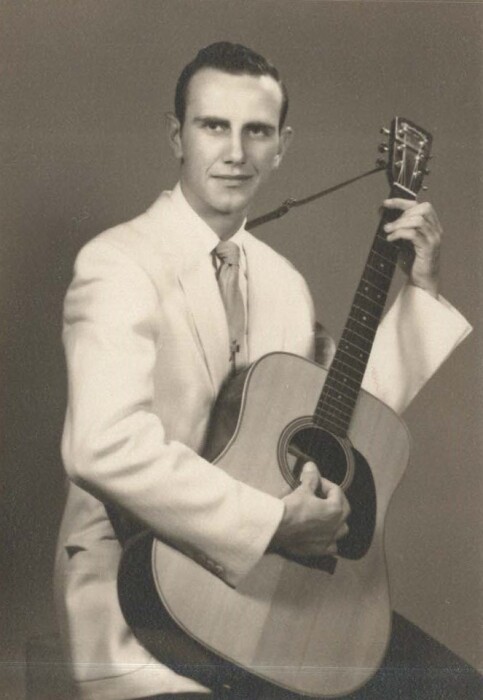 Gail's life began on February 26, 1936 in rural Delavan.  He was the son of Zora "Joker" and Margaret (Sorenson) Burns.  Gail graduated from Wilsey High School in 1954 and went onto Emporia State Teacher's College to further his education.  He was united in marriage to the former Carol Say on June 23, 1957 at the Wilsey Christian Church.  Gail worked for a short time as a disc jockey in Tennessee and later returned home to the farm where he farmed with his father and later his own family.  His true passion was music, and he was in many groups but most notably his band the BJ- 4 Four which played around the region performing Country and Western, Western Swing & old Standards for many years.  Gail was a bass guitar player, sang vocals and played many string instruments.  He was very fond of his Boston bulldog Rambo and especially his life of music and agriculture.  Gail's greatest joy was his family which includes his wife of 63 years Carol of Delavan; children Dylan (LeAnn) Burns of Edmund, OK, Victor (Gail) Burns of Lincolnville, Doyle (Pam) Burns of Wichita and Vicki (Jason ) Wolf of Medora; grandchildren Tyler Burns, Natalie ( Alex) Marks, Travis (Kayla) Burns, Bridgette (Jesse) Hamm, Jesse Crump, Katie Burns, Dusty Wolf and Dakota Wolf; great grandchildren Ruby Marks, Sawyer Hamm, Chev Reimer, and Braxton Wolf; brother Everett Burns and several nieces and nephews.  Gail passed away at his home on November 23, 2020.  He is preceded in death by his parents, brother Bernard Burns and great granddaughter Brylee Burns.  His family will gather with friends on Friday from 4-8 p.m. at Yazel-Megli Funeral Home, Herington where his funeral service will be held on Saturday at 1 p.m. led by Pastor Clarence Summer.  Gail will be laid to rest in Delavan Cemetery.  Memorial contributions in his name may be directed to Dickinson County Home Health and Hospice.  Please sign his online guestbook and leave a memory of Gail at www.ymzfh.com.

To order memorial trees or send flowers to the family in memory of Gail C. Burns, please visit our flower store.