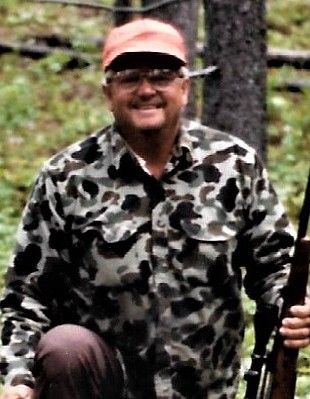 Gerald was the eighth of nine children of Gus and Ida (Piper) Carpenter and was born December 18, 1938 at the family home in Cedar Point.  Gerald graduated from Cedar Point High School in 1956 where he was an outstanding basketball and baseball player.  He married Sharon Elizabeth White of Florence on June 3, 1961.  To that marriage was born three sons; Gerald Todd, Timothy Lee, and Stacey Lynn.

Gerald, a.k.a Sweeney, was a well-known third generation business man in Cedar Point, Chase and surrounding counties.  He owned and operated Gerald’s Repair & Service in Cedar Point from 1969 to 2010 when his health forced him to retire.  Gerald bought out his father Gus’s business, The Trail Garage, which had operated in the same location since Gus built and opened in 1920.  Gus’s father, Jerome, owned and operated a livery stable in Cedar Point in the early 1900’s after moving from Texas to Kansas in the late 1880’s.

Gerald was an avid outdoorsman who enjoyed driving around the Flint Hills in his Broncos hunting and fishing with his family and friends.  He, like his father and brothers was an accomplished Trap Shooter, winning the Kansas State Junior Championship in 1954 at the age of 15.  He enjoyed taking vacations on his motorcycle, driving his beloved Model “A” in parades, and treasured spending time with his 5 grandchildren (Levi, Jordan, Tori, Dylan, and Colton) whether they were going hunting and fishing or he was attending their school functions and sporting events.

Gerald is survived by his three sons and their families; Gerald Todd, his wife Diane (Bezdek) of Marion, their two sons and families, Levi Todd, his wife Teisha (Rogers), and Dylan Jerome all of Marion; Timothy Lee, his wife Lenora (Mallory) of Olathe, their two daughters, Jordan Elizabeth of Fort Collins, Colorado and Tori Nicole of Olathe; Stacey Lynn, his wife Jennie (Linsea), their son Colton Lee-Eugene all of Saginaw, Texas.  Also surviving is one sister, Cleta Scott of Strong City and many nieces and nephews.

Services will be held on Saturday, August 4, 2018 at 10:30 a.m. at Zeiner Funeral Home in Marion.  It was Gerald’s wishes that he be cremated and his ashes spread at some of his favorite hunting spots.  His marker will be placed with his parents and two brothers at Cedar Point Cemetery.  The family encourages memorial donations to the Alzheimer’s Association at alz.org in lieu of flowers or gifts.  Online condolences at www.zeinerfuneralhomes.com.  Services by Zeiner Funeral Home- Marion, 620-382-2112.

To order memorial trees or send flowers to the family in memory of Gerald Lee Carpenter, please visit our flower store.