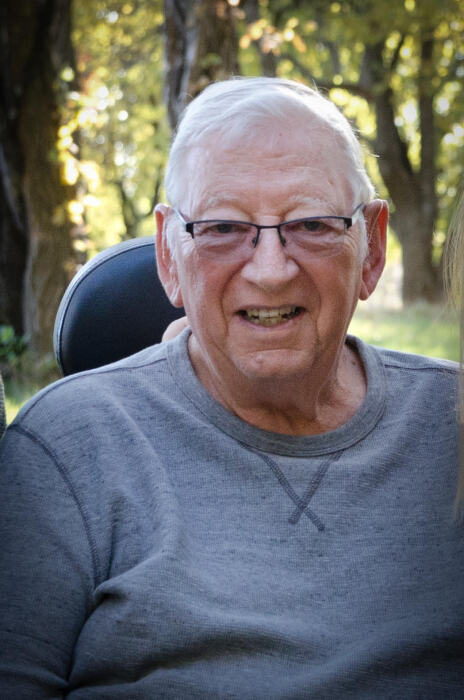 Harold’s "Bus" life began on April 3, 1936, the son of Roy and Sarah (Baldwin) Coats in Newton, Kansas. He graduated from Potwin High School, Class of 1954 and served his country in the U.S. Marine Corp from 1954-1957. He married Sherry Ann Berryman on February 18, 1961, at the Potwin Christian Church. Bus worked in the El Dorado Refinery starting when it was named Skelly, then Getty and retiring when it was Texaco. He loved his family, taking photos, bird watching, crappie fishing and scooter rides around the property with his little dog Baxter. Bus enjoyed riding with the Christian Motorcycle Association, working with youth groups and driving car loads of kids to hear God’s Word.

His loving family includes his sons and their wives, Vincent and Lola Coats, Jon “Lance” and Robin Coats all of El Dorado, Darren and Amy Berryman of Benton, Kansas; nine grandchildren, four great-grandchildren and two on the way; brother and his wife, Richard and Carol Coats of Nampa, Idaho; sister, Joan Sommers of Potwin; sister-in-law, Marilyn Coats of Potwin.

He was preceded in death by his parents; his wife Sherry; a brother, Charles Coats and a brother-in-law, Johnny Sommers. Harold “Bus” passed away peacefully on Wednesday, December 23, 2020, at the age of 84 years old.

His family will gather with friends on Sunday, December 27, from 2-4 p.m. at Lamb Funeral Home, 120 S. Main, Whitewater. Funeral service will be Monday, December 28, at 11:00 a.m. at Whitewater Community Church, 703 E. Central, Whitewater. Interment will follow with military honors in McGill Cemetery.

Memorial contributions may be directed to Ponca Bible Camp of Ponca, Arkansas or Gary Quequish Ministries of Ontario, Canada, both in care of Lamb Funeral Home, P.O. Box 358, Whitewater, Kansas 67154. Please sign his online guest book and leave a memory of Bus at www.ymzfh.com

To order memorial trees or send flowers to the family in memory of Harold "Bus" L. Coats, please visit our flower store.