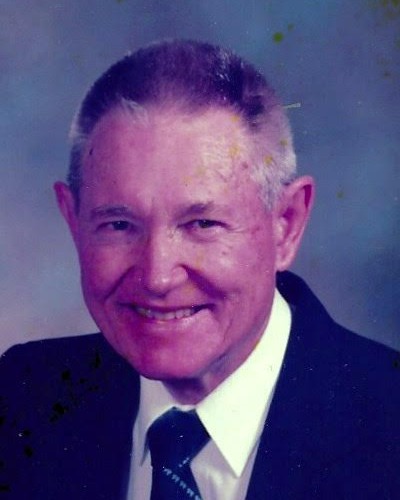 Harold Dwight Henry was born on June 3, 1926, in Byron, OK to William Howard and Sarah Gladys (Allen) Henry. Dwight sought to live a life of service to others. He served his country in the United States Marine Corps from January 30, 1945, until August 21, 1946, as a guard to the Admiral on the USS Wasp during the closing days of World War II and transporting troops home from the war. After the war, Dwight graduated from Freed-Hardeman College and Harding College, later completing a Master’s degree from the University of Wichita (now Wichita State University) while teaching and raising his family. He was united in marriage to Averil Jean Hawes on June 8, 1952, at Bethel Church of Christ near Whitewater, KS.

Dwight’s strong work ethic continued throughout his career as a respected Church of Christ minister (Augusta, KS, Newton, KS, Belgreen, AL) and educator in public schools in southeast Missouri and Kansas (McClain, Haviland, Douglas, and 32 years in the Wichita Public Schools). Dwight’s stepfather Moses Roosevelt Bean was a carpenter and taught Dwight skills he applied in designing, building, and remodeling multiple structures; and in making furniture. He also worked as a baggage handler for the Santa Fe Railroad, as an inspector at Boeing, and did construction work and home repairs. He remained dedicated to Christian service, continuing to teach Bible classes, and assisted others throughout life.

Dwight and Averil were married 67 years, settling Wichita, Kansas until 2000, when moved to be closer to family, first to southeast Kansas (Moran then Bronson), then in 2014 to Renaissance Assisted Living in Stillwater, Oklahoma. After Averil’s death in 2015, Dwight continued to make his home at Renaissance of Stillwater where he shared valued relationships with residents and staff.

Dwight is preceded in death by his mother and stepfather, sister Margaret Bean Beach Yates, sister-in-law Donice Hawes Kelly Pruitt, brothers-in-laws Harold Beach, Alvin Kelly, Walter Pruitt, and nephew Galen Beach. His family will gather with friends on Friday December 16, 2022, from 1-2 p.m. at Lamb Funeral Home, Whitewater, KS where his funeral service will be held at 2 p.m. led by Grant Goodvin, Minister of the Greenwich Road Church of Christ in Wichita, KS.  He will be laid to rest with Marine Corps honors following the service at Green Valley Cemetery, Furley, KS. Memorial contributions can be made to the Traditions Hospice or to the American Heart Association. Please sign his online guestbook and leave a memory of Dwight at www.yazelmeglifh.com. THE LIVESTREAM OF THE SERVICE IS AVAILABLE ON YOUTUBE AT MCTV20LIVE AND SELECT H. DWIGHT HENRY SERVICE

To order memorial trees or send flowers to the family in memory of Harold "Dwight" D Henry, please visit our flower store.