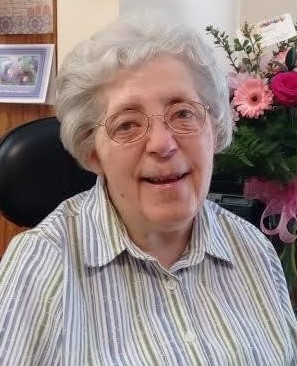 Helen Justina Busenitz was born on February 4, 1941, to William L. and Emma (Wiebe) Busenitz.  She grew up on the family farm southeast of Whitewater, Kansas.

Being the third-oldest of eleven children as well as the first daughter, she learned responsibility early by helping care for her eight younger brothers and sisters. The twin brothers were born when Helen was seven years old, and she and her younger sister Theresa helped a great deal in their care.

The family faithfully attended Sunday School and church at the Emmaus Mennonite Church.  God used daily family devotions, annual summer Vacation Bible Schools, Whitewater revival tent meetings, and the daily Back to the Bible Broadcast radio programs to help her realize she was a sinner and needed God’s forgiveness.

At the age of eleven, on the last evening of the Missionary Conference in her church, Helen trusted in the work of Christ on the cross as her only way of being saved from sin.  When she was sixteen, she was baptized and became a lifelong member of the Emmaus Mennonite Church near Whitewater, Kansas.

After doubting the assurance of her salvation for many years, she expressed her concern to one of her teachers, who explained 1 John 5:11-12 to her.  “And this is the record, that God hath given to us eternal life.  And this life is in His Son.  He that hath the Son hath life; and he that hath not the Son of God hath not life.”  This verse confirmed her assurance of having eternal life.

Her desire to be a missionary began in childhood.  For further Biblical education to prepare for mission work, she attended Grace Bible Institute (later Grace University) in Omaha, Nebraska.  It was during her last semester, while attending a weekend retreat for college students at Gospel Missionary Union headquarters (now Avant Ministries), that the Lord laid Ecuador on her heart. She claimed John 15:16: “Jesus said, ‘Ye have not chosen Me, but I have chosen you and ordained you, that you should go and bring forth fruit, and that your fruit should remain.’”

After graduating in 1964 with a Bachelor of Religious Education degree, Helen applied to and was accepted by Gospel Missionary Union.  This was followed by a year of Spanish language school at Rio Grande Bible Institute in Edinburg, Texas.  She arrived in Ecuador, South America, on August 17, 1966, and lived most of her 46 years of service in Ecuador in the coastal city of Babahoyo.

As she began her missionary career, her motto verse was John 15:16, quoted earlier.  When hard times arose, Helen would rely on the truth of this verse.  No person convinced her to go, but rather the Lord had laid that country on her heart.  God gave peace confirming that this was her place of ministry.  A second verse which helped her to remain faithful in difficulties was 1 Corinthians 4:2: “Moreover it is required in stewards that a man be found faithful.”

Helen loved the Ecuadorian people and invested many hours preparing and teaching Bible studies and lessons, annually organizing DVBS weeks held in her home, and making her own flannel graph and song visuals for the children’s classes.  She taught all age levels, from pre-kindergarten children to young people to university students and adults.

In June, 2012, Helen retired from Ecuador after 46 years of service.  She retained a deep concern that the believers she had taught would remain true to the Lord and to the truth of the Bible.

Once back in the United States, she made her home at the Presbyterian Manor in Newton, Kansas.  After the evening meal at the Manor, she spent hours at the computer keeping in contact with her Ecuadorian friends and praying for them.

She was preceded in death by her parents; brothers, Gilbert, Robert and Herbert Busenitz; sister, Theresa Ortmann, and a sister-in-law, Grace Busenitz. Helen passed away peacefully on Saturday, April 18, 2020, at the age of 79 years old.

You may pay your respects on Wednesday, April 22, from 10:00 a.m. – 8:00 p.m. at Emmaus Mennonite Church, 9070 NW Meadowlark Road, Whitewater, Kansas. A private family service will be held on Thursday, April 23, at 2:00 p.m. With the current Covid-19 recommendations, Emmaus Church will graciously  livestream Helen’s service at the same time for you to view on their Facebook page at  https://www.facebook.com/EmmausChurchWhitewater/ .  The service will also be available to view later.

Memorial contributions in Helen’s name may be directed to Avant Ministries or Presbyterian Manor of Newton in care of Lamb Funeral Home, P.O. Box 358, Whitewater, Kansas 67154. Please sign her online guest book and leave a memory of Helen at www.ymzfh.com

To order memorial trees or send flowers to the family in memory of Helen Justina Busenitz, please visit our flower store.