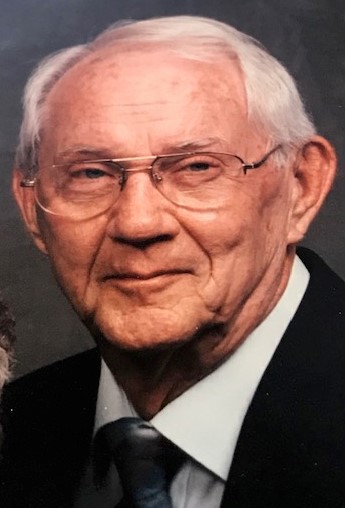 Howard’s life began October 14, 1926 in Marion, Kansas.  He was the son of Lester and Esther (Berg) Klein.  Howard was a 1944 graduate of Marion High School and served his country in the United States Army in Japan.  Howard also attended telegraphy school in Omaha.   He was united in marriage to Shirley Kaiser on June 17, 1953 at Trinity Lutheran Church in Durham.  Howard was a depot agent for the Southern Pacific and Rock Island Railroads, retiring in 1988.  He had lived in Wellington prior to moving to Herington in 1980.  He was a member of the American Legion and the VFW, and Our Redeemer Lutheran Church in Herington.  He was an avid flower gardener and “precise” lawn mower.  He also indulged in Hershey miniature chocolates and enjoyed going to the casino and scratch off lotto tickets.  His loving family includes his wife of 66 years Shirley Klein of Herington; children Joreen (Graham) Jones of Aurora, CO, Sandra (Mark) Sutton of Abilene and Diana Klein of Wellington; grandchildren Jennifer (Levi) Feeney, Susan (Paul) Turle, Sally Jones, Sonya Sutton, Shad Sutton, and Leslie (Christopher) Seematter; great grandchildren Landon, Campbell, Matthew, Kyle, Raven, Ryder, Karter, Kyla and Everette.  Howard passed away on May 23, 2020 at Salina Regional Hospital.  He is preceded in death by his parents, infant daughter Sherry and brother Donald Klein.  Visitation will be held on Wednesday from 10 a.m. to 7 p.m. at Yazel-Megli Funeral Home, Herington.  Graveside services will be held on Thursday at 11 a.m. at the Durham Park Cemetery, Durham led by Reverend Alan Stahlecker.  Memorial contributions in Howard’s name may be directed to Our Redeemer Lutheran Church, Herington.  Please sign his online guestbook and leave a memory of Howard at www.ymzfh.com.

To order memorial trees or send flowers to the family in memory of Howard Leslie Klein, please visit our flower store.