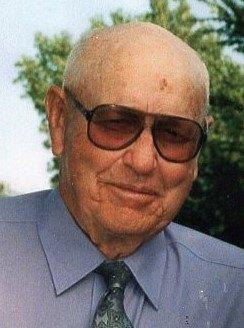 Ivan spent his younger years moving quite often with his parents following work before moving to Florence, Kansas. Here he would start high school only to move once more to the farm in Burns, Kansas where he would graduate from Burns High School. During his high school years, he met Anna "Margaret" Bishoff. The two later married in August of 1947.

Ivan spent the rest of his days working on the farm before moving into Asbury Nursing Home in Newton though he worked many other jobs in his life as well. In his younger years he worked in the oil field with his father, at the local grocery store, the Florence Creamery, the refinery in El Dorado, Whitehead Feeds in Burns, and as a school bus driver. In his downtime, he spent a number of years in a square dance club, and he would love to go for a drive to check on the crops and cattle.

He was preceded in death by his Parents; his wife Anna "Margaret" Bishoff Morgan; and two brothers, Robert, and Melvin Andrew Morgan.

Ivan is survived by four sons, Micheal and wife Beverly, of Marion, Ks; Larry and wife Delores, of Hesston, Ks; Richard and wife Kris, of Moundridge, Ks; and Rodney and wife Robin, of Burns, Ks; nine grandchildren and eight great-grandchildren.

Memorials can be made out Asbury Park Nursing Home, The Christian Church of Florence, or Harry Hynes Hospice

To order memorial trees or send flowers to the family in memory of Ivan Ray Morgan, please visit our flower store.