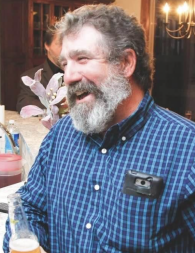 Rob’s life began on May 5th, 1966 in Wichita, KS.  He was the loving son of James and Carol (Oblander) Hett.  Rob was a 1984 graduate of Marion High School, attended Butler County Community College and served in the United States Army Reserve from 1983-1989, seeing service in Germany.  Rob was blessed with a daughter, Valeree Robin in 1990 and a son Adam Robert in 1992.  Rob’s passion for dirt bikes was passed on to his son, enjoying countless hours at the motor cross track with family and friends.  Rob was also a softball coach for his daughter spending several summers at games.   Rob was united in marriage to the former Mandy Everett on April 15, 2017 in Tonganoxie, KS.  From there, they went on to countless adventures across the county, making a lifetime of memories together.  Rob valued hard work, starting at a young age, opening CR Kennel with his mother Carol and ending his life as a superintendent for Piping Technology Company in McPherson, a job that was more than just work and brought to his life a special “on the road family” and many traveling adventures from which he always came home with stories to laugh about.  Rob was a giving soul who never met a stranger and genuinely loved people.  He enjoyed woodworking, guns, grilling, and loved spending time on his family farm.  Most evenings you could find him with a grill full of food and a big smile read for anybody who stopped by.  His loving family includes his wife Mandy of Marion; parents Jim and Carol Hett of Marion; children Valeree (Blake Ware) Hett of Hillsboro and Adam (Elizabeth) Hett of Topeka; grandchildren Bryden, Camryn, Brooks and Declan; siblings Tim Hett of Emporia and Kimberly (Michael) Metcalf of Roseburg, OR; Mandy’s children Shannon Glover, and Skyler Stover; grandchildren Avery, Dawson, and Colton and Rob’s faithful dog Buck.  Rob passed away unexpectedly at his home on Friday May 21st, 2021.  His family will gather with friends on Tuesday June 1st from 5-8 p.m. at Yazel-Megli Funeral Home, Marion.  His funeral service will be held on Wednesday June 2nd at 11 a.m. at the Aulne Church led by Pastors Jeff Lee and Jim Helzer.  Rob will be laid to rest with military honors in Marion Cemetery following the service.  Memorial contributions in his name may be directed to the Wounded Warrior Project in care of the funeral home.  Please sign his online guestbook and leave a memory of Rob at www.ymzfh.com.

To order memorial trees or send flowers to the family in memory of James "Rob" Robert Hett, please visit our flower store.