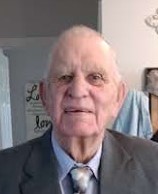 Jim’s life began on May 28, 1928 in Florence.  He was the son of Frank D. and Zula May (Fisher) Magathan.  Jim served his country proudly in the United States Army stationed in Korea after World War II.  He was united in marriage to the former Earline Perkins on March 24, 1954 at Valley United Methodist Church in Marion.  After Jim returned home from the service, he went to work for the Kansas Department of Transportation, starting in 1949 and retiring in 1991 as a regional supervisor. He was a member of the Valley United Methodist Church.  Jim loved cars and horses.  He was always ready for his next car and always looking.  Jim enjoyed watching the birds at his bird feeders and had a sweet tooth, especially for cookies.  He is survived by his children Jimmy M. (Rita) Magathan, Jr. of Emporia, Monte A. Magathan of Marion, Denise Magathan of Whitewater, Kerry W. (Kathleen) Magathan of Wichita, Linda Fowler and Janis Weiss; eight grandchildren; two great grandsons and his sister Shirley Nienstedt of Goddard.  Jim passed away on May 5, 2020 at the Newton Medical Center.  He is preceded in death by his parents, wife of 64 years Earline, brother Loyd Magathan and sister Charity Reavis.  His family will gather with friends on Saturday at 11 a.m. for a graveside service at the Hillcrest Cemetery, Florence.  Military honors will be rendered at the graveside.  Yazel-Megli Funeral Home, Marion is serving the family.  Memorial contributions in Jim’s name may be directed to the Valley United Methodist Church in care of the funeral home.  Please sign his online guestbook and leave a memory of Jim at www.ymzfh.com.

To order memorial trees or send flowers to the family in memory of Jimmy Martin Magathan, please visit our flower store.