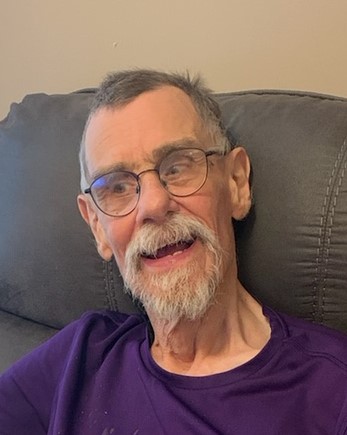 John Thies passed from this life to his heavenly home on Wednesday, September 16, 2020. John was born May 20, 1948, the third child of Clyde and Bernice Groening Thies of Marion, KS. Survivors in his immediate family include brother, Wayne Thies (Sandra) of Newton, and sister Phyllis Bull of Bartlesville, OK. John was preceded in death by his parents, brother-in-law Robert Bull, and niece Renee Copenhaver.

As a young child, John loved to watch the chickens on the farm. Until 1990, when he was 42, John lived in Marion with his mother, Bernice. Many Marion residents knew John as he rode his bike all over town. From birth until he moved away, John attended Marion Christian Church. His parents Clyde and Bernice farmed and later owned and operated Thies Food Center on the hill. His trademark caps and shirts were evidence of his love of K-State. His joy was eating and sipping for hours on a large diet Coke!

In 1990, John moved to an apartment in Hillsboro. He was a client of Northview Developmental Services, Newton, which subsequently became Rescare, Newton. John said “I’m retired now” when he was 65. He then spent his daytime hours with other older clients, in the retirement wing of Rescare day services building. Many loving caregivers have been John’s helpers and companions and all of them expressed how sweet John was. John’s very special cousin Merle Knak, lived with him in a Rescare Home in Newton, KS. Born six months apart, they were special buddies their whole lives.

Nieces and nephews and their children have all loved their Uncle John their whole lives as well: Charlotte Thies Waner (Ty) and children Chisholm, Mckinnon, & Kellen of Marion; Eric Thies (Carri) and daughter Savannah of Lenexa; Thurston Thies (Heidi) and children Kariana, Bronalea and Beckett of Augusta; and Natalie Thies and children Chance, Caroline, George and John of Newton. Another nephew is Darrell Bull and children Madellyn and Mitchell of Houston, TX. John had MANY aunts and uncles as his mother, Bernice, was one of 16 Groening siblings.

We are all celebrating the memory of our brother and Uncle John who taught us all to have tender loving hearts toward each other and all those in the world who are “special”. Heaven is richer and we are poorer with his passing.

Family will gather with friends on Sunday, September 20 from 2-3:30 pm at Yazel-Megli Funeral Home, Marion, KS. Graveside service will follow at 4:00 PM at the Marion Cemetery.

Memorials can be made to Marion Christian Church or Rescare, Newton KS, in care of Yazel-Megli Funeral Home, PO Box 96, Marion, KS, 66861.

To order memorial trees or send flowers to the family in memory of John James Thies, please visit our flower store.