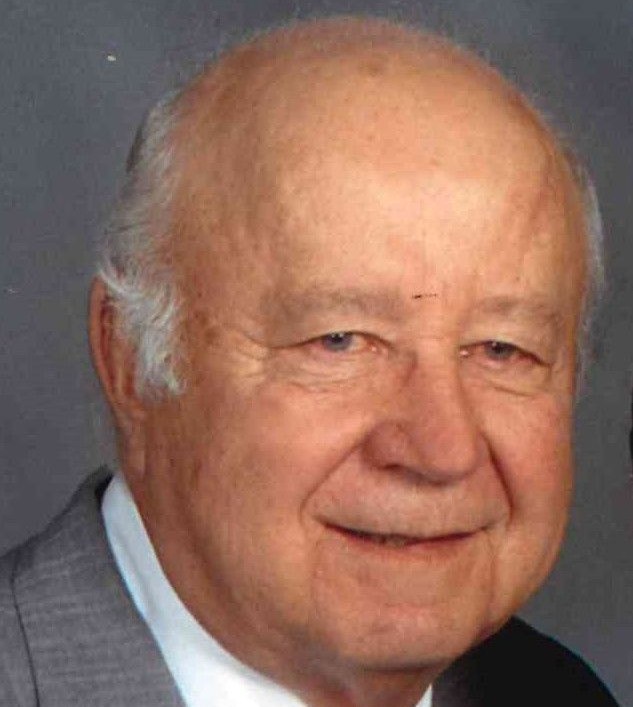 Joseph Augustive Nowak, age 88, peacefully passed away at his home of the past four years in Surprise, Nebraska. He was born at the family dairy in Castle Rock Township, “The Ridge”, Wisconsin on April 3, 1933 to Gustave and Emma (Prochaska) Nowak. He was the sixth of 10 children.

Joe grew up on the family dairy farm, milking cows since the age of six. Other than helping on the farm, during his high school years he also worked at a cream corn factory. On occasion cans would explode (which didn’t smell very good), and Joe said he could never eat creamed corn the rest of his life due that experience….and ne never did!
After graduating from Monfort High School, Joe joined the Air Force serving in the 40th Air Refueling Squadron assigned to the 40th Bombardment Wing at Smoky Hill Air Force Base. While stationed at Smoky Hill AFB in Salina, Kansas, he attended a Polka dance at the Star Lite Ballroom in Pilsen. It was during this dance that Joe met the love of his life, JoAnn Svoboda. He had to ask JoAnn’s five rather large brothers for permission to take her home the night they met. Their courtship continued while he served his military time. One funny story Joe liked to share was teasing JoAnn that while stationed in Greenland there was a girl behind every tree (there were no trees in Greenland!).
Following an honorable discharge from the Air Force, Joe and JoAnn married on August 20, 1957 at St John Nepomucene Catholic Church, Pilsen, Kansas and Pilsen is where they made their home until moving to Nebraska in 2017. Seven children were born from this 64+ year union, and Joe became known as “Pa” to his children and all their friends. Early in their marriage, Joe worked at various jobs including Boeing in Wichita. He eventually began working with his brother-in-law, Gerald, in soil conservation. Eventually, Joe and his sons formed Joe Nowak and Sons, Inc. (now known as Nowak Construction Inc based in Goddard, Kansas). After long days in the field, Joe spent many late nights repairing radiators for the local farmers and other patrons at Nowak Radiator Service in Pilsen.
Joe, being civic-minded, was a life-long member of the Tampa American Legion Post 372, a member of the USD 397 school board (1977-1981), lay distributor, cemetery board member and religion teacher at St John Nepomucene, Marion County Soil Conservation board, and various other committees and roles.
Upon Joe’s retirement, he and JoAnn were able to take some adventurous trips seeing other parts of the country and the world, including the Holy Land in the Middle East. Joe also enjoyed spending hours woodworking in his shop making cedar chests, shelves, chest of drawers, desks and other requests from family members. Most evenings it was hard to find him without a book reading Louis L’Amour, John Grisham and many other authors.
Joe loved all sports, especially the Green Bay Packers (he was a total Cheese Head!), the Kansas City Royals, and Tiger Woods golf. He was also an avid fisherman going on various trips, including Lake Texoma, the Gulf of Mexico and Alaska. He loved spending time with his Kansas and Wisconsin families—visiting, playing Pitch, Blackjack, Uecker and Tripoly. He had a wonderful sense of humor and a gentle nature. Joe’s life was a testament to his faith.
Joe is survived by his wife, JoAnn of the home, his seven children, Joseph B (Yolanda) Nowak, Goddard; John (Judy) Nowak, Garden Plain; Jerry (Mary Mercado) Nowak, Vernon, Texas; Judy Steinborn (Thane Schwartz), Marion; Jackie (Paul) Gengler, Salina; Jan (Jayson) Hanschu, Hillsboro; Jennifer (Tim) Frasher, Surprise, Nebraska, 34 grandchildren, six step-grandchildren and many great grandchildren. As well as one sister, Evelyn “Pat” Nowak, Grafton, Wisconsin and two sisters-in-law, Susan Nowak, Franklin, Wisconsin and Delores Svoboda, Herington, and many nieces and nephews and friends.
He is preceded in death by his parents Gustave and Emma Nowak, sisters Bernadette (Len) Cummings, Alberta (Jim) Sullivan, Mary (Jim) Margis, Rita (Ike) Edge, brothers Jim (Doris) Nowak, George, Tony and Tom Nowak, brothers and sisters-in-law Geraldine Svoboda, Gerald (Barbara) Svoboda, Ted (JoAnn) Svoboda, Lawrence Svoboda, John (Mary) Svoboda, and Jimmy Svoboda.
Yazel-Megli Funeral Home is serving the family. Rosary will be at 7pm, Sunday, October 24th (refreshments following) and funeral mass will be at 10am, Monday, October 25th (lunch following). Both rosary and funeral will be at St. John Nepomucene, Pilsen, Kansas. Memorials can be sent to Chaplain Kapaun Legacy Fund.

To order memorial trees or send flowers to the family in memory of Joseph A Nowak, please visit our flower store.