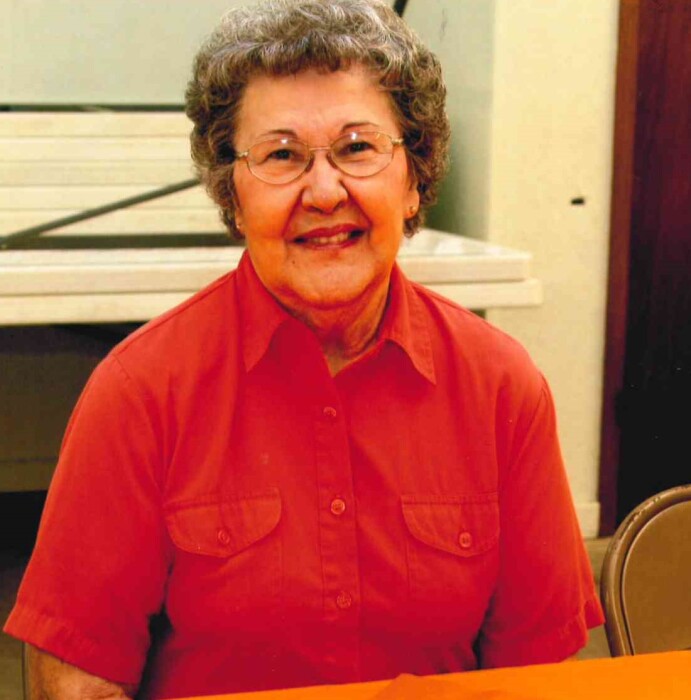 Juanita Tousignant passed from this life on Sunday, Aug. 30, 2020, at The Legacy of Herington.

A visitation will be held from 4 until 8 p.m. Friday at the Herington Chapel of the Yazel-Megli-Zeiner Funeral Home. A prayer service will be held at 7:30 p.m.

Funeral services will be held at 1 p.m. Saturday at Our Redeemer Lutheran Church in Herington. Interment will follow at Sunset Hill Cemetery. The Rev. Alan Stahlecker will lead the services.

Mourning Juanita are her daughter, Susan, and favorite son-in-law, Ray, of rural Herington; grandsons, Kristopher (Hailey) Mueller of Independence, Kan.; Jacob (Katie) Mueller of Springfield, Tenn.; and a host of nieces and nephews, other relatives and friends.

Juanita Sophia Gehrke was born on a farm near Ramona, Kan., on July 10, 1930. She was the youngest child of Carl and Sophia (Bruckner) Gehrke. She had seven older brothers: Arthur, Paul, Edwin, Leland, Oscar, Harvey and Lowell. All of them proceeded her in death. A daughter, Barbara Coleen Tousignant, passed away in 1966.

Juanita was baptized into the Christian faith as an infant at the former St. Paul Lutheran Church of rural Ramona. She was confirmed into the Lutheran faith and remained faithful to Christ throughout her life.

She was a 1948 graduate of Herington High School and she enjoyed the reunions with her classmates.

She was married to Robert J. Tousignant on July 13, 1951, at the Morris County Courthouse in Council Grove, Kan., during the Great Flood of ’51. They lived in several locations during his U.S. Army career but settled in Herington where they remained for the rest of their lives. They celebrated 51 years of marriage before his passing in October 2002.

Prior to her marriage, Juanita worked at a hardware store in Emporia. While working at Duckwall’s variety store in Herington, her favorite job was wrapping gifts. She always made every gift look special. Juanita also enjoyed working at Stiles Thriftway grocery store as a checker, where she greeted everyone with a smile and always memorized the weekly ad prices to give the best service to customers.

Juanita loved living in the country, happily mowing a huge lawn, tending to flowers and a plentiful garden. She helped care for many animals on the farm, passing that love of animals to her daughter. Among her hobbies were crafting and sewing, making doll clothes, quilts and several prom dresses. Every birthday was a reason for her to make a specially decorated cake. She had a “can do” attitude, even reroofing the barn after storm damage.

She was a 4-H project leader for many years, served as an officer in the Lyon Extension Homemakers Unit and supported her church, Our Redeemer Lutheran.

After the sale of the farm, the Tousignant couple lived on East Trapp Street in Herington, where they enjoyed having close neighbors. Due to health concerns, the couple moved to the Hilltop Apartments, enjoying daily meals and social life.

Following the death of her husband, Juanita continued to live at the Hilltop. She entered Herington’s assisted living unit in 2006. While a resident there, and later in the nursing home, she always enjoyed church services, bingo, card games, crafts and musical visitors.

Juanita was known as a sweet and loving lady, always willing to help out and care for others. She will be missed and mourned by many. But there also is rejoicing that she is now with God in heaven.

“Blessed are the pure in heart, for they shall see God.” Matthew 5:8

To order memorial trees or send flowers to the family in memory of Juanita Sophia Tousignant, please visit our flower store.