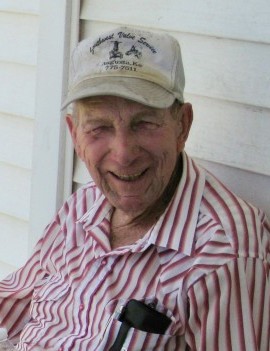 He joined the Navy when he was 17 years old and spent 2 years on the USS Sullivans.  After he was honorably discharged, he met a pretty girl on a blind date in the month of November. He married Lois Glass on July 15, 1951.  They were married for 66 years.  They had three children: Sandra L, Michael E., and Bruce W.

Family was very important Lawrence.  Spending time with his children when they were young was rewarding to him.  He was so proud of his grandchildren and great-grandchildren.

Lawrence spent 25 years as Head Grounds Keeper at South East High School.  He enjoyed his work and did it well.  Retirement brought Lawrence to the country.  Rural living provided him much joy.   Lawrence really enjoyed life.  He derived a lot of satisfaction working with his horses, cattle, and raising his chickens.

We are going to miss our husband, father, father-in-law, grandpa, brother, uncle, neighbor, friend, and sweet gentle kind man.  We are looking forward to the day when we see him in heaven.  We know he is in the arms of Jesus and this gives us all great comfort.  Until we see you again.

To order memorial trees or send flowers to the family in memory of Lawrence F. Sayers, please visit our flower store.