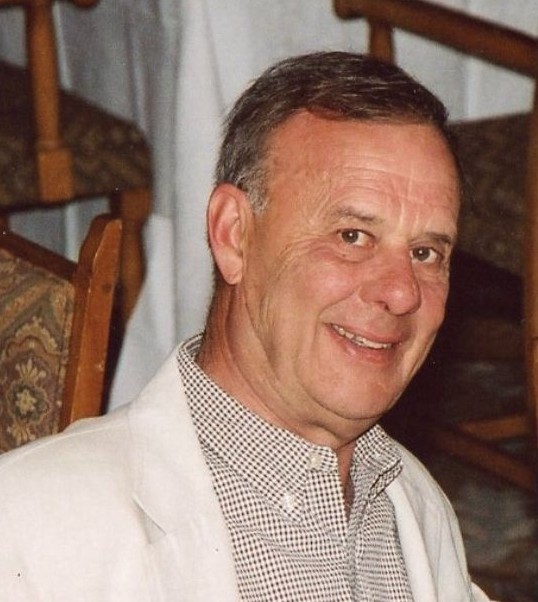 As a boy, Leon Mills spent hours riding his horse, Bob, up and down wooded hills and ravines in hot pursuit of outlaws and bandits. Years later, as a consulting veterinarian for feedlots, he spent hours driving through western Kansas and the Texas and Oklahoma panhandles. His independent spirit and love of the country never changed.

Leon was born to Joe and Cordelia (Anderson) Mills on May 10, 1940 in Abilene, Kansas. He and his older sisters Joanna and Kitty grew up on the family farm that bordered nearby Enterprise. He enjoyed helping raise crops and livestock—but not chickens—and went to school in Enterprise and Chapman, graduating from Dickinson County Community High School in 1958.

In high school, he was active in 4-H and FFA, but music mattered most and he became an accomplished trombonist. Lucky for him, his sister Kitty was a talented pianist and they spent hours playing popular songs together. As a junior, not only was he deemed worthy to play in the Abilene Municipal Band, he marched with them down Pennsylvania Avenue, leading President Eisenhower’s second inaugural parade.

That summer at the county fair, Pat Dawe and her hot pink shorts caught his attention and they began dating their senior year at rival high schools. As graduation neared, Leon and his mother went through Kansas State University’s college catalog, looking at majors. They started at A, but nothing clicked until they got to V, Veterinary Medicine.

Leon and Pat continued dating at K-State, where he joined Delta Tau Delta and played in the symphony orchestra. They married three years later on July 9, 1961 and by 1964, when Leon earned his doctorate in veterinary medicine, Pat had graduated and their son Mark was born.

Leon worked in mixed animal practices, for a pharmaceutical research company, and served two years as a U.S. Army captain and a post veterinarian at Ft. Riley. While there, he shared caring for Chief, the last U.S. Army combat cavalry charger and already 35 years old. Later, Dad laughed that no veterinarian wanted to be on duty if Chief so much as coughed. But the true highlights of those years were the births of son Scott and daughter Cindy.

When his sister Joanna’s husband, Joe Clemence, offered him a position at his feedlot outside of Herington, Kansas, the family of five moved and settled for good. Leon also bought a local mixed animal practice and Pat managed the books while their dachshunds, Muffin and Shadrach, patrolled the waiting room.

In 1980, Leon took a leap, sold his practice, and joined the feedlot consulting firm of Jim Sheldon and Associates. He’d found his niche and later became an independent consultant. Clients appreciated his integrity and the results he produced, pharmaceutical companies sought out his expertise, and his children learned not to ask, “What’s in the cooler?”—the answer was probably “brain tissue for the lab.”

He took joy in his children’s joy, never missed a concert, game, or performance, and spent countless weekends at parades and rodeos as a Herington High Striders dad. As his children married and had children, he threw them just as far in the swimming pool as he had their parents and he loved on them just as hard, too.

Retirement wasn’t easy, but K-State sports and cruises with friends helped until his battle with Parkinson’s disease began. The relentless loss of mobility and declining health frustrated him greatly. Even so, hospital nurses and caregivers appreciated his wit and how hard he tried to keep a brave face.

His family will gather with friends on Saturday, November 20th, at 9:30 am for the internment of ashes at Mount Hope Cemetery (1005 S Lincoln Street, Enterprise) and again at 11:00 am for a memorial service at St. Paul Lutheran Church (114 N 8th Street, Herington). A lunch and fellowship will immediately follow the service at St Paul Parish Hall. Memorial contributions in his name may be made to St. Paul Lutheran Church or the Parkinson’s Foundation, in care of the funeral home. Please sign his guest book and leave a memory of Leon at www.yazelmeglifh.com

To order memorial trees or send flowers to the family in memory of Leon Joseph Mills, please visit our flower store.