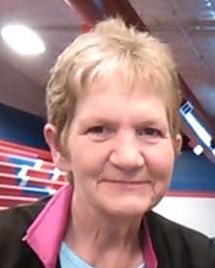 Linda Louise (Ayers) Foster, 65, of McPherson, Kansas, passed away on Thursday, July 8, 2021 after a long battle of COPD and lung cancer. Linda was born on September 27, 1955 to William Carson and Thelma Rose  Ayres in Arkansas. As a child, she excelled in many sports, especially basketball. After graduating from Hill City, Kansas High School in 1973 she was awarded a basketball scholarship to Colby Community College. She was an excellent cook and pursued that as her lifetime career. She took several classes and became a certified baker. Linda was known to make the best homemade cinnamon rolls around. Linda served as a baker and cook at school and at McPherson Hospital where she retired 18 months ago. Linda loved to bake her famous cinnamon rolls, to play bingo, thoroughly enjoyed scratching lottery tickets for winners, enjoyed being with people, and being at her children and grandchildren’s sporting events which she seldom missed. She was also a big KU fan. Her kindness to others will always be remembered. She is preceded in death by her father; three sisters, Lucille, Shirley, Brenda; and four brothers, Larry, Jerry, Alvin, and Kenny Ayers. She is survived by her mother, Thelma Ayers; brother and his wife, Kim and Lana Ayers; four sons, Brian Billinger of Newton, Bradley Billinger of Canton, Kansas, Brent Billinger of Canton, Kansas, Christopher Billinger of Herington, Kansas; two daughters, Brandy Gutierrez of Great Bend, Kansas and Krystal Billinger of McPherson, Kansas; 11 grandchildren. Linda’s wishes were to not have a funeral service, but to have a life celebration memorial service which will be announced at a later time. Memorial contributions may be directed to the McPherson Hospital in care of Yazel-Megli Funeral Home, 902 East D Street, Hillsboro, Kansas 67063. Please sign her online guest book and leave a memory of Linda at www.ymzfh.com.
To order memorial trees or send flowers to the family in memory of Linda Foster, please visit our flower store.

Services Pending at this Time