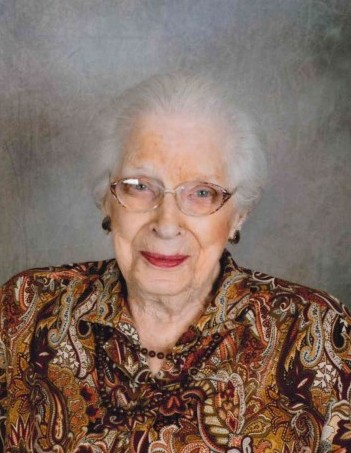 She was born October 1, 1919, at Roxbury, Kansas, the daughter of Charles and Elizabeth Smith Anderson. She later graduated from Peabody High School in 1936.

In 1939 she was married to W.H. “Bill” Janzen. They farmed in the Florence area for a number of years. Louise was hired by the Marion County Welfare Department in 1970 and later was a State Welfare Department employee. She moved to Marion in 1983 and retired from social services in 1985 after 24 years.

Louise was active on church committees serving on the church board, youth leader and Sunday School Superintendent at Florence Christian Church. She originated the Jayhawk 4-H Club where she was a Community Leader for 15 years and Project Leader for five years. Louise was also a member on the Marion County Extension Council.

Louise loved camping and traveling including a trip to Alaska in1998, the Rose Parade in 2000, and many camping trips to Canada.

She was preceded in death by her husband Bill in 2011.

In lieu of flowers, memorials may be made to the Marion Assisted Living Center or the Marion Christian Church in care of Zeiner Funeral Home, Marion.

To order memorial trees or send flowers to the family in memory of Louise Janzen, please visit our flower store.