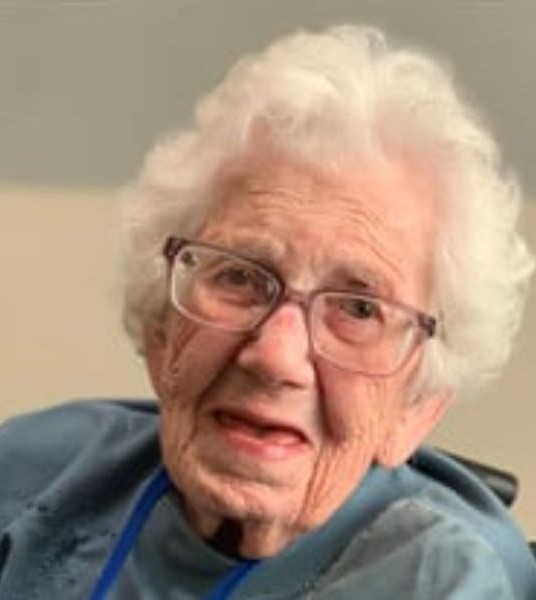 For 102 years the people who knew and loved her were blessed by Mabel’s presence on this earth. Mabel Erline Patterson passed from this life on February 17, 2022 in Kearney with family by her side.

Private family graveside services will be held at Hillcrest Cemetery in Florence, KS. Visitation will be 5:00 to 7:00 p.m. Tuesday, February 22, 2022 at O’Brien Straatmann Redinger Funeral Home in Kearney.

Mabel was born at her parent’s home in Florence, Kansas, on May 13, 1919 and was the first child of Elmer and Irene (Bowlby) Johnson. Her siblings were LaVere and Jim. She spent her early life in the small town of Florence, graduating from Florence High School in 1937 where she was part of the “Wicked Five” a group of fun-loving girls known for their youthful antics.

She married John Martin in a double wedding ceremony with good friends Charles (Chuck) and Lenora (Pankratz) Graham on September 30, 1939 in Florence. In the spring of 1940 John was killed in a car accident and the following October their son John was born. In Florence she served the Methodist Church as treasurer, worked at Kansas Power and Light company and worked in her parent’s business, Johnson’s Variety Store. She also worked for a short time as a “parts runner” at the Great Bend, Kansas Army Airfield during World War II.

On April 14, 1946, she married James Howard (Pat) Patterson who was a widower with a young son, James (Jim) Jr. The family made their home in Arkansas City, Kansas, moving to El Dorado, Kansas in the late 1940s. Their daughter, Barbara Jean was born there. Pat worked as an auto parts man at Barnes Motor and later as the Auto Parts Manager for McClure Motor Company. Mabel was a homemaker and worked at the El Dorado High School cafeteria and sold Avon. In 1974 they moved to Great Bend, Kansas, where Pat worked for Standish Ford. He passed away in 1984. Mabel moved to Fremont, Nebraska in 1986 to help her daughter and son-in-law with their children which included newborn twins. In 1987 she moved to Kearney when Jean’s family moved there.

Mabel was a wonderful daughter, sister, wife, mother, grandmother, homemaker and cook. She was well known for her chocolate chip cookies, cinnamon rolls, sweet pickles and pickle relish. She volunteered in each church she was a member of and you could always find her in the kitchen helping prepare for wedding receptions, church potlucks, funeral dinners, etc. She was also a member of the American Legion Auxiliary and volunteered many hours for legion activities including cemetery flag placement. She and Pat loved camping and spent many happy days with friends who enjoyed the same - Kenneth & Frances Hurd, Abe & Zena Martin, Elmer & Norma Davis, Noel & Martha Talkington and many others. She and Pat were members of the Bluestem Campers and Good Sam camping clubs. She also enjoyed playing cards and bingo.

She was very independent and wanted to do for herself as much as possible. She was always concerned for her family and other people and tried to help wherever and whenever she could.
She lived on her own until breaking a hip in April, 2018. In July, 2018 she moved to Homestead Assisted Living and after breaking the other hip in November, 2018 she moved to Mother Hull Home where she was lovingly cared for. She celebrated her 100th birthday at Mother Hull Home with friends and family in May, 2019.

She was preceded in death by her parents, her two husbands, her brother and sister, her son, Jim; and daughter-in-law, Sheila Patterson.

To order memorial trees or send flowers to the family in memory of Mabel Patterson, please visit our flower store.