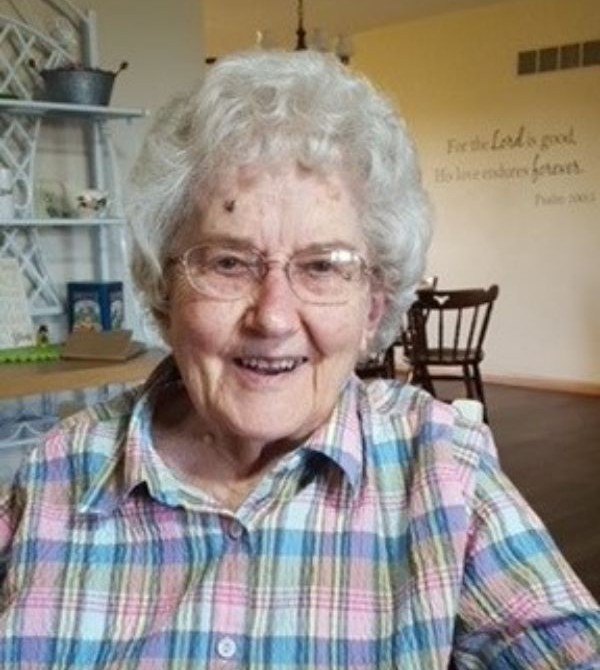 On August 12, 1926 Margaret entered this world, the ninth of eleven children born to Abraham “A.T.” and Anna (Ediger) Neufeld. Her growing up years were spent working and playing on their farm west of Inman. Many fond stories were told of these years, as she and her siblings learned to live on little and laugh a lot. From a young age, Margaret dreamed of someday being a nurse. She attended Little Valley Grade School in Little Valley Township and graduated from Inman High School. After high school Margaret began nurses training at the Bethel Deaconess hospital. Those years were special to her and she formed a number of lifelong friendships with her nursing classmates, the March Winds, as they called themselves. During her nursing tenure, she was invited to W.F. & Esther Wiebe’s for an evening of table games. It was there that she met Richard Wiebe from Whitewater. That acquaintance progressed from friendship to courtship and from courtship to love. They were married August 12, 1951 at the Bethel Mennonite Church near Inman, KS.

Mom enthusiastically joined Dad in his life and work. They farmed for a living, but they didn’t live to farm. Rather they lived to glorify the Lord and serve the people in their lives. Seven children were born to them and became their primary work. They poured themselves into training us to live life according to scriptural principles. We often heard Mom say, “Dad and I are one!” Mom taught us much with her words and even more with her example.

She faithfully sought to be the wife and mother described in Proverbs 31:

● She “looks to the ways of her household and does not eat the bread of idleness.”

● She “opens her mouth with wisdom and teaches with kindness.”

● She “clothes herself with strength and dignity.”

We often heard her singing when we were growing up. Sometimes it was hymns for her own encouragement, and other times her singing was for our instruction. “Grumble on Monday, grumble on Tuesday, grumble the whole week through…”, or “Angry words, oh let them never...” were a couple of instructive songs we heard from her when our attitudes were not right. She was a “mentor” long before the term became popular as she mentored her children and other individuals God brought into her life. She enjoyed many things, like flowers, baking, a cup of coffee, and visiting with friends. There were also things she didn’t enjoy like snakes, butchering chickens (butchering in general), driving (she always had one foot on the accelerator and the other foot on the brake), beets, hominy, washing the milk buckets, and a few other things, but we rarely noticed because she wasn’t a complainer.

Mom generally loved life and had a ready smile and a cheerful disposition. It was a rare occasion for her to turn down the opportunity to attend church, watch her kids or grandkids compete in a ballgame, or go to one of her family’s homes for a visit. She loved her Neufeld family and the Christmas gathering that took place each year in Inman. Another highlight for her were the birthday celebrations with her five sisters. These day-long visits were filled with love and laughter, sharing and caring, and more laughter.

Mom wasn’t a perfectionist nor a perfect person. Her cooking was good, but not gourmet. Her house and yard were well kept, but they were never put on a magazine front. She had struggles; yet distasteful memories of her are few. She was a person very much in the background, rarely on stage or in the limelight, yet so strong in her own quiet way, faithfully encouraging, supporting, praying for, and being loyal to those the Lord had entrusted to her.

Mom became a Christian as a young girl, kneeling with her Dad in the farmhouse dining room, praying in German as she confessed her sin to the Lord and accepted Jesus’ forgiveness. At times, she struggled with knowing for sure that she was saved, but over time that changed. Romans 10:13, “Whosoever shall call on the name of the Lord shall be saved“ was shared with her by one of her granddaughters. She clung to that verse as well as John 6:37, “All that the Father giveth me shall come to me; and him that cometh to me I will in no wise cast out.” Mom’s walk with the Lord was consistent, spending time reading and praying for each of her family and others every morning and night…and often throughout the day. She had a stack of verses she memorized and reviewed daily. At the end of her life, she asked us to pray that she would be faithful to the end and patient until the Lord came to get her. Her faith has “found a resting place”.

Mom never really retired, but her activities changed. Gardening went from a large vegetable garden to flower beds. Cooking for nine eventually changed to meals for two and then to getting supper just for herself (a bologna sandwich was her favorite). Responsibilities changed again when Dad had to move to Wheat State Manor. Mom faithfully attended him each day until the Lord called him Home on September 10, 2017. Several years later, declining health required her to move to Presbyterian Manor. She was saddened to leave the home she loved but accepted her plight graciously. She kept up her work by interacting with her visitors, spending time praying, reading scripture, being content, and being thankful. The staff could hear her praying from her bed when they passed by her room in the evening. We found in her journal a statement she had written for herself years ago, “My goal is to first of all be a happy, contented wife who is pleasing to my husband and a mother whom my children will always like to come home to. And, most of all, I want to be what Jesus wants me to be.” Mom never retired from any of that.

Mom’s strength of character was not an inborn trait. Rather, it came from the relationship she had with her Savior, Jesus Christ, and the work He did in and through her. She passed from this life into Heaven on October 22, 2022.

She is survived by her children, Marjorie and Don Price of Missouri, Cecil and Jacque Wiebe of Burns, Lyle and Lenora Wiebe of Whitewater, Lewis and Jenny Wiebe of Whitewater, Winnie and Ed Neal of Texas, Wanita and Russ Busenitz of Peabody, and Marlys and Steve Unruh of Newton; 30 grandchildren, 50 great-grandchildren, sister-in-laws Gladys and Arlene Wiebe, and brother Cornie Neufeld.

To order memorial trees or send flowers to the family in memory of Margaret E Wiebe, please visit our flower store.

New Emmaus Cemetery next to Church