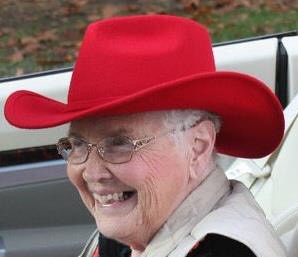 Marilyn Geis, 88, formerly of Marion passed away May 2, 2019 at Brookdale Assisted Living where she had been a resident for the past year.

Marilyn was born November 18, 1930 the third child of Walter and Dorothy Collett Hayen.  She grew up and spent most of her life in Marion County, Kansas.  She married Robert Geis of rural Durham, Kansas July 31, 1955 at the Youngtown Church.  The couple lived on the family farm northwest of Durham.

Marilyn's teaching career began in 1950 teaching 3rd grade in Hoisington.  She also taught in Council Grove, Durham and at the Grand Central School.  She taught kindergarten at Canton Galva for 14 years and then became the Librarian until her retirement in 1991.

Marilyn was a member of the Durham Baptist Church before moving to Marion.  She was very active there.  She and Bob both sang in the choir and she played the piano.

Gma's house was a favorite place for her grandchildren.  They all have memories of special times with G ma, lots of those memories include picnics in the living room, donuts holes, Gambinos pizza and bread sticks and popcorn from the big yellow bowl.

Marilyn was preceded in death by her husband, Robert of forty-four years and brother John Hayen.

To order memorial trees or send flowers to the family in memory of Marilyn Geis, please visit our flower store.