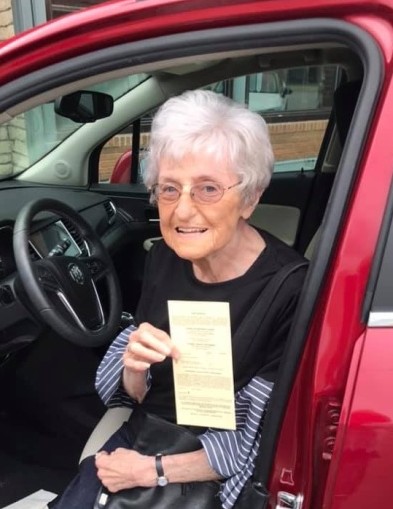 Marjorie Alice McAuliffe Jackson was born on September 1, 1937, in Ottawa, KS.  She was the daughter of Joseph Patrick and Mary Luella (Spencer) McAuliffe.  Marjorie was a 1955 graduate of Princeton High School and earned a two-year diploma from Emporia State.  She was united in marriage to Larry Jackson on July 21, 1957 in Princeton.  Marjorie worked alongside her husband at the El Jay Cattle Company as the business manager.  Marjorie was active with the Florence Library, and Harvey House in Florence.  She was a member of the Ladies Auxiliary at St. Luke's Hospital, and the Kansas Livestock Association Auxiliary.  Marjorie served on the church board at Cedar Point United Methodist for nearly 30 years and enjoyed her Priscilla Bridge Club.  Her greatest joy was her family which includes her daughter Marsha (Ronald) Douskurt of Bryant, AR, and daughter in law Mary (Frank) Harshman of Elmdale; grandchildren Coleman Jackson of Kansas City, MO, Clayton Jackson of Kansas City, Kansas, and Garrett Jackson of Manhattan, KS; sister Mary Ann Oswald of Kansas City, MO, nephew Flint (Jackie) Oswald of Olathe and niece LaNita (Jim) Malinowski of Olathe.  Marjorie passed away on November 11, 2019 at Wesley Medical Center in Wichita.  She is preceded in death by her parents, husband Larry and son Michael.  Her family will gather with friends on Saturday from 3-5 p.m. at Yazel-Megli-Zeiner Funeral Home.  Her funeral service will be held on Sunday at 2:30 p.m. at the Elmdale United Methodist Church led by Pastor Tim Woods.  She will be laid to rest in the Cedar Point Cemetery.  Memorial contributions in her name may be directed to the Florence Library.  Please sign Marjorie's online guestbook and leave a memory at www.ymzfh.com

To order memorial trees or send flowers to the family in memory of Marjorie Alice Jackson, please visit our flower store.