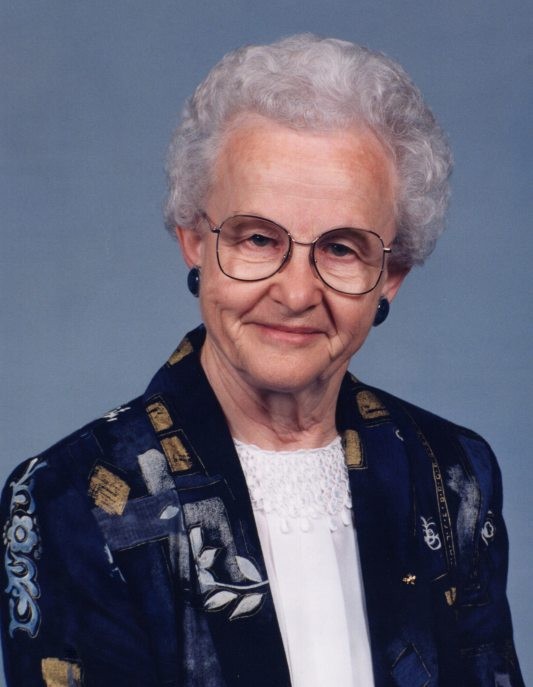 Marjory Sue Garrett, Age 88, entered her heavenly home on May ­29, 2018. She was born on July 13, 1929, to Edith (Ehling) and Leonard Bridgeman on a farm outside Abbyville, KS.  She attended Abbyville Grade School and graduated from Abbyville High School in 1947 and Hutch Juco in 1949.  Marge taught fifth and sixth grade in Sawyer, KS, for five years.

On June 29, 1952, she married Reed Emerson Garrett in Abbyville, Kansas.  Marge and her husband left for California where Reed served in the Navy.  Marge continued to teach in Sawyer during the school year but made visits to Reed in California until 1954 when he came back home to Woodbine, KS.  The couple moved to Oregon where they resided for about 15 months, but they returned to Kansas to farm in 1955.

The couple had three children: twin daughters Roann and Rosann born in 1956 and daughter Jenise born in 1961.  Marge taught kindergarten in Woodbine for five years.  She then substitute taught for sixteen years.  She went back to college for two additional years graduating from Kansas Wesleyan in 1980 and taught junior high in Hope, Kansas, from 1980-1996.  She was honored by receiving Teacher of the Year the first year the award was offered at Hope. She substitute taught once again after retiring from teaching.

Marge had a gift of writing poetry and was asked to write poems for special occasions for family and friends.  She also sang duets at numerous funerals over the years with her brother-in-law, Rowe Garrett.

In addition to her devotion to her family and teaching school, she taught Sunday School and Bible School at the Woodbine United Methodist Church for many years.  She sang in the choir, was a member of the church, of WSCS (Women’s Society of Christian Service), was a delegate to West Kansas Conference, a member of WOW (Women of Woodbine) and a member of Nocturne Club (a civic club).

Marge was loved by her husband of 65 years, her children, grandchildren and great grandchildren.  She will be remembered for her witty sense of humor, her athletic ability, her poetry and her love of family.

To order memorial trees or send flowers to the family in memory of Marjory Sue Garrett, please visit our flower store.