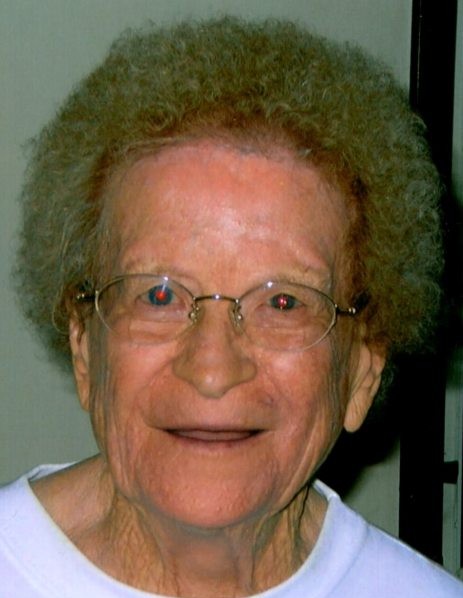 I was born to Arnold and Helen (Chalker) Lueker on October 12, 1924, on the farm northeast of Hope, Kansas.  I was raised there.  At the age of 6, I had eye surgery because my tear ducts were closed.  The surgery was done in Kansas City.  That same year I had scarlet fever, measles, and chicken pox. At the age of 16, I had  mastoid surgery.

I went to Immanuel Lutheran Parochial School for eight years and was confirmed with five other children.  I went to Hope High School and graduated with the class of 1944.  After graduation, I did clerical work at various places in the area until my marriage.

On February 14th, 1947, I met Adolph Backhus.  We went to the show in Hope.  After that night, we would either go to the show in Herington or go roller skating.  We were married on May 2, 1948, at the Immanuel Lutheran Church.To this union were born two daughters; LaVerda Ann and Joan Marie.

We farmed and operated a dairy for many years.  After farming, we built a house in Salina.  We lived there one year.  We moved back to the farm to help care for my mother.  After her passing, we moved to Herington where I lived until December 2013. (written by Mary Anna Backhus,  9/17/13)

Mrs. Backhus enjoyed bowling many years at the former Pla-Bowl Lanes of Herington.  One exciting evening she bowled a 300.  She and her husband would bowl as a couple and they were known for bringing their daughters of school age with them to the bowling alley. The daughters were expected to complete their homework while they bowled.

She is preceded in death by her husband, Adolph, and parents.

A reception and visitation for family and friends will be 1:00 – 1:45pm, Tuesday, April 3, 2018, at the Immanuel Lutheran Church, (Shady Brook) Herington.  The funeral service will follow at 2:00pm. The closing service will be the burial at the Woodbine Cemetery.

The family requests memorials to Home Health of Dickinson County or the Immanuel Lutheran Church; and they may be sent to Zeiner Funeral Home, 404 S. Broadway, Herington, KS, 67449.

To order memorial trees or send flowers to the family in memory of Mary Anna Backhus, please visit our flower store.