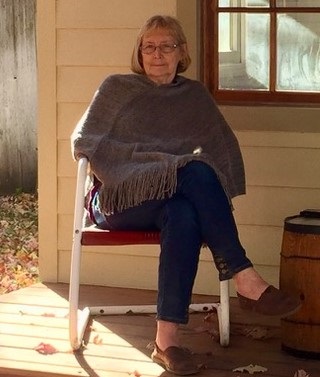 Mary Elizabeth (Stucky) Enz was born on January 23, 1950, to Irvin and Wilhelmina Stucky in Newton, KS—or as she reminded everyone “in 1950 along came a girl so nifty.” Growing up she spent a lot of time laughing and playing with her two older brothers, Gordon and Norman, and many cousins. Hard work was an expectation on the farm, a value she carried with her throughout her life and passed to her children and grandchildren. She adored her daddy, whom she would go to for anything, including the occasional prank.  Mary became a Christian at an early age and was baptized at First Mennonite Church.  The quietness of her everyday action spoke loudly, constantly revealing her love for the Lord.

Her formal education started at the Kellas One-Room School. She would ride her pony or go-cart the one mile to and from school. She later attended Berean Academy and loved to play softball and basketball. Mary’s mother did not approve of Mary playing sports and she would have to sneak out to attend practice. Often, her coach would pick her up at the end of their lane to make sure Mary would make it to the games. Mary went on to Tabor College in Hillsboro where she studied Elementary Education and was heavily involved in the band, choir, and various small vocal groups. Here she met many lifelong friends who became like family. While at Tabor, she also worked at Lee’s Drive-in as a soda jerk with several of her college friends. Her brother and sister-in-law visited her often at Lee’s to share a meal and keep in touch. She graduated from Tabor in 1972 with her teaching degree.

While Mary and Jim both grew up at First Mennonite Church, their paths seldom crossed as he was an older city boy and she was a country girl. It wasn’t until the summer of 1971 that they started dating. Mary spent that summer living in Laurel, MD while volunteering for a children’s home. Jim was completing his first year of voluntary service in Akron, PA, in the MCC Material Aids Department. The two volunteer groups would often get together on the weekends to play baseball and this is where their story began. After her summer in Maryland, they continued to write to each other. The following 4th of July he gave her a diamond. They were married on June 1, 1973.

They settled down in Newton to be close to jobs and family. Mary taught for seven years at Roosevelt and Washington elementary schools. Although she loved teaching, her desire was to be a homemaker, but she was always a teacher at heart. She became a full-time mother when her first child, Nicholas, was born in 1979, then Crystal (1981) and Jodi (1984) were born soon after. Mary took an active role in her children’s lives. She firmly believed that parental involvement in a child’s education is a must, and she lived by that. Mary used her teaching, farm, sewing, and jack-of-all-trades skills to joyfully serve her family and community. She was a part of many boards and associations for organizations her children participated in. This led her to sew costumes for musicals, hem choir dresses for concerts, and bake for all the fundraisers. Mary was considered a second mother to many. All her children’s friends enjoyed visiting the Enz house because Mary would make them feel welcome and at home. A warm batch of cookies was always a guarantee.

Mary proudly transitioned to the role of “Nana” to her five grandchildren; Collin, Brett, Lily, Owen, and Jack. She joyfully instilled her faith in Christ in them through songs and countless storybooks. She enjoyed quilting, sewing, cooking, and occasionally jumping on the trampoline with them.

Mary’s faith was quietly modeled and shared in her day-to-day life. She cherished family, relationships, and friendships above anything else. She never turned down anyone who asked her for help or advice. Her cousin said her “Welcome Sign” was always out. Her sewing career brought her to Charlotte’s, the local quilt shop. This quickly became a second home that was full of love and support for her. Mary also cherished her Sunday School class which walked alongside her and Jim during her dark hours of need.  It was always easy for Mary to give support and encourage others, but it was a true testimony to the life Mary lived when the support was given back to her.

Mary was diagnosed with leukemia in 2014, but it did not define her. For seven years she gracefully battled the cancer. She found encouragement from friends and family. She fought with everything she had to be with her family, and gave it her all, trusting God along the uncertain path and living joyfully. She went to be with her Lord and Savior, Jesus Christ, on March 15, 2021, at the age of 71.

To order memorial trees or send flowers to the family in memory of Mary Elizabeth Enz, please visit our flower store.