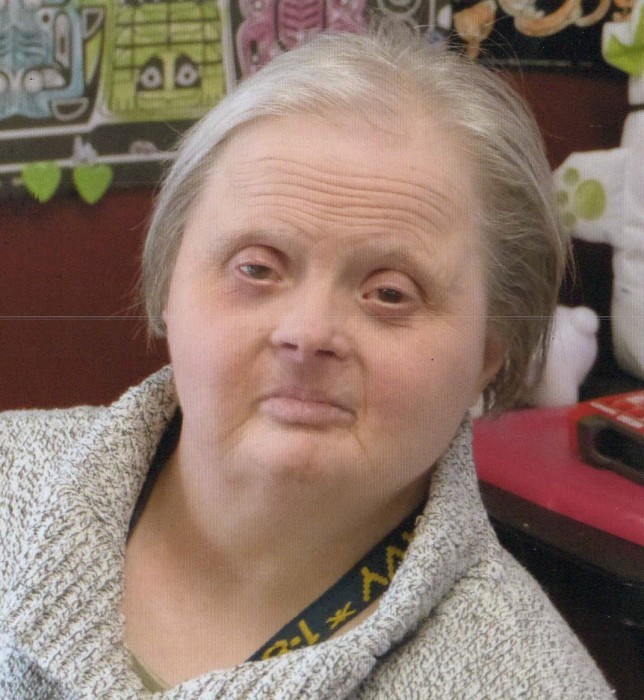 Maureen Clarice Holub, 65, passed away Saturday, September 14, 2019, at St. Francis Hospital in Wichita due to complications from a heart attack and pneumonia.

She was born with Downs Syndrome along with her identical twin sister, Marian Therese, to Louis A. and Mary A. (Tajchman) Holub of Tampa on July 3, 1954 at St. Luke Hospital in Marion. She lived with her sister, Marian, who was her lifelong companion, in Newton for 38 years under the care of Northview and later, ResCare. She worked at ResCare Industries for many years doing small jobs, such as assembling nuts and bolts, cleaning plastics, helping with recycling and shredding paper. In recent months, she spent her time at the ResCare Senior Program with many friends and companions. She enjoyed painting, coloring, drawing, and doing puzzles and crafts. She had a strong will and loving personality.

She was preceded in death by her parents; brothers, Adolph "Ed" Holub and Gerald Lou Holub; and sister, Marian Therese Holub. Survivors include brother, Ken Holub of Tampa; sisters, Rose Mary Brasil of Lakewood, CO. and Kathryn Walker of Coppell, TX; Aunt Sylvia and Uncle Virgil Beving of Ackley, IA; and many friends. Visitation will be held on Tuesday, September 17, from 6-8 p.m. at Yazel-Megli-Zeiner Funeral Home, Marion. A Mass of Christian burial will be celebrated on Wednesday, September 18, at 11 a.m. at St. John Nepomucene Catholic Church in Pilsen with rosary prayer at 10:30 a.m. led by Father Brian Bebak. She will be laid to rest in the Pilsen Cemetery following Mass. Memorial contributions in her name may be directed to St. John Nepomucene Catholic Church, Pilsen. Please sign her online guestbook and leave a memory of Maureen at www.ymzfh.com

To order memorial trees or send flowers to the family in memory of Maureen Clarise Holub, please visit our flower store.