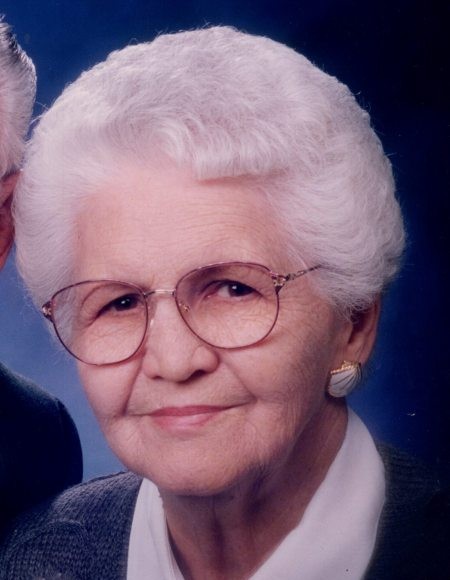 HERINGTON - Maxine Minnie Jones, died Monday, May 1st, 2017, at the Herington Municipal Hospital.  She was born on July 17th, 1918, at Clay Center, the daughter of Ladislas and Ellen “Nellie” (White) Martin, Jr.

She graduated from Clay Center High School with the class of 1937 and went to Brown Mackie.  After receiving her business certificate, she went to work as secretary and other office positions in Wichita, Detroit, MI, and the Air Base at Herington. She met Vernon Jones while working at the Air Base and they were married, December 27, 1945, at Clay Center, Kansas.  She was a loving and devoted farm wife and loving mother to five children.  Once the children were in school, she went to work at the Lutheran Home of Herington as a nurse’s aide.  She and her husband moved to Homestead Village Apartments in 2008. They celebrated their 70th wedding anniversary in 2015.

She is preceded in death by one son, Mike Jones on August 18, 2000; two brothers, Bernard and Wilbur Martin; two sisters, Frances Martin,  Josephine Kiefer; and her parents.

The family requests memorials to Herington Hospital Foundation or St. John Catholic Church; and they may be sent in care of the Zeiner Funeral Home, Herington.

To order memorial trees or send flowers to the family in memory of Maxine Minnie Jones, please visit our flower store.