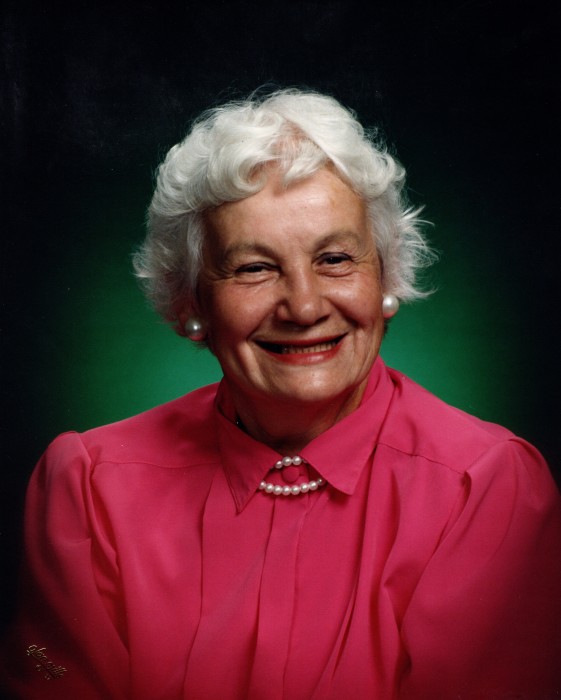 Millicent's life began on July 31, 1927, in Marion.  She is the daughter of Henry and Lillie (Holub) Jirak.  Millicent was united in marriage to Robert F. Vinduska on October 28, 1946, in Pilsen.  She was a faithful parishioner of St. John Nepomucene Parish (Holy Family) in Pilsen for many years.  Millicent was a member of St. Ann's Altar Society at the church, spoke on Father Kapaun and gave church tours, kept the church cleaned and taught religious education classes as part of her parish life.  She ran the Pilsen Gift Shop and helped keep the books of her husband's auto repair shop in Pilsen.  Millicent was blessed with a large family and extended family which includes her children Laurel Ann Collins of Holton, Carol Jean (Clarence)  Sponsel of Wichita, Lillie Marie Vinduska of Pilsen, Joseph H. (Letizia) Vinduska of Lincolnville, Robert C. (Laura) Vinduska of Lincolnville; son in law John Tharp of Rose Hill; 28 grandchildren; many great-grandchildren and great-great-grandchildren; sister Rita Molner of Seattle, WA, sister in law Marguerite Jirak, brother in law Clarence Stroda, brother in law Dr. Eugene Vinduska DDS, and several nieces and nephews.  Millicent passed away on July 19, 2019, at the St. Luke's Living Center in Marion.  She is preceded in death by her parents, siblings, husband Robert and daughter Kay Tharp.  Her family will gather with friends on Wednesday at 10:30 a.m. at St. John Nepomucene Church in Pilsen for her rosary prayers followed by Mass of Christian Burial at 11 a.m.  She will be laid to rest in the church cemetery.    Memorial contributions in her name may be directed to the Father Kapaun Guild or mass intentions to the church.  Yazel-Megli-Zeiner Funeral Homes, Marion is serving the family.  Please sign her online guestbook and leave a memory of Millicent at www.ymzfh.com.

To order memorial trees or send flowers to the family in memory of Millicent Vinduska, please visit our flower store.