Milton Clarence Gehrke was born on January 23, 1926, and passed away on December 17, 2021, at age 95. He was baptized at St. Paul's Lutheran Church on February 14, 1926 and confirmed on April 28, 1940. He grew up on a farm south of Herington in a very small house with four brothers and one sister and his parents. At age 18 he quit school and joined the Army to serve in WWII on June 1, 1944. He did Basic Training in North Carolina and during that time his brother Roy was killed in the war. Milton was able to come home for the funeral and when he returned to North Carolina, his Army buddies had already been sent off to war, so Milton had to take Basic Training for the second time. He was stationed in Central Europe and received many Medals and Ribbons. He received an Honorable Discharge on April 25, 1946. After returning from the war, he hauled cattle to the Kansas City Stockyards. During that time, he started dating Mildred Kohls. They went to the same church, and he asked her out on their first date at St. Paul's Lutheran. They wed on September 25, 1949. He then worked at the Herington Fairgrounds as the caretaker. In 1952 he and his wife and daughter Jolene moved to Ulysses Kansas to run and work at the alfalfa fields and run the irrigation. He later bought the Standard Service Station and two brothers, and a nephew joined him in working there. His wife Mildred did the accounting. He and his wife built a new house in 1954 and had their son David was born in 1955. In 1960 they moved to Salina Kansas, and he worked at the Missile Silos. He worked through the night and slept during the day. In 1961 they finally moved back to Herington where he wanted to fulfill his dream of becoming a farmer/rancher. He managed the Herington Cattle Co. at the airbase in Herington and farmed and took care of his cattle after work. He later worked at Skelgas and delivered propane to farmers in the area and still did his own farming and feeding his cattle after work often until midnight or after. He had his son David driving a tractor and helping with the cattle at age 10. David continued to help his dad until recently while he was also working fulltime and giving up family time to help his dad.

In 1971 they bought a farm south of Herington, and he continued his dream of owning his own farm. He retired from Skelgas in 1987 and could finally farm/ranch fulltime. Not only did he farm for himself he was always helping family and friends with their crops and harvest.
In April of 2012 he finally had to give up his fulltime farming and sold all his farming equipment but kept some cattle. He just sold all of his cattle 2 years ago at the age of 93.
Milton spent the last year of his life at the Legacy of Herington as his health was deteriorating. Something that was very hard on him, but in his mind, he was still farming and always talking about his cattle and and asked if they were being fed. Preceding him in death are his parents, Otto, and Clara (Brockmeier), his brothers Roy, Otto F. (Junior) and Richard and his sister Esther. He leaves behind his wife of 72 years Mildred (Kohls) Gehrke, Daughter Jolene (Aaron) Werner, of Alta Vista, Son David (Rita) Gehrke of Herington, grandchildren Ashley (Adam) Tyner of Wamego, Beau (Kelcey) Werner of Dwight, Lauren (Nicole) Gehrke of Spring Hill, and Mitchell (Jessica) Gehrke of Herington. Great Grandchildren Dylan, Kaden and Hudson Tyner of Wamego, Alysia Werner of Dwight and Brooks Gehrke of Herington, a brother Clarence Gehrke of Herington and Sister-in-law Frances Gehrke of Herington and many nieces and nephews. He will be missed deeply. Milton was a giver and a helper to all his farmer friends. He and his wife made many friends over the years no matter where they lived. They loved playing cards (pitch) at their home or at friends' or family's homes. He also loved to dance, and they would attend many dances over the years. His wife Mildred recently joined him at the Legacy of Herington, and they were finally reunited after being apart for almost a year. They were able to spend the last 4 1/2 days together until his passing. Funeral services will be held Wednesday, December 22 at St. Paul's Lutheran Church, 114 N. 8th Street, Herington at 11 am with a military burial service following at Sunset Cemetery. Memorials can be sent or given to St. Paul's Lutheran Church, Herington in care of Yazel-Megli Funeral Home, 404 S. Broadway, Herington, KS 67449. Yazel – Megli Funeral Home is serving the family. Please sign his online guestbook and leave a memory at www.yazelmeglifh.com.

To plant memorial trees or send flowers to the family in memory of Milton Gehrke, please visit our flower store.

My favorite Milt story and one of my favorites from when we had the Sale Barn.
When I was working at the Sale Barn, Milt came to the sale on a regular basis. If he bought a bull, he would always have them checked to be sure they were good bulls. The bull would go to the vet chute out back and Milt would wait for results- sometimes that would take quite awhile. After waiting patiently for several hours for results from the vet one day, I finally got the report from him and without thinking called out" Milt, your semen report is good."
There was a whole lobby of folks to hear that!
He turned 50 shades of red and so did I but we sure had a good laugh over it.
He was such a nice man- I always enjoyed visiting with him. Prayers of peace for Mildred and the family.

Oh Milt,
My heart aches as I learned of your passing but I\'m extremely thankful for the time I was given with you. You\'re smile and funny personality always made my day better. It was an honor to spend the last year with you and your smile is so missed! 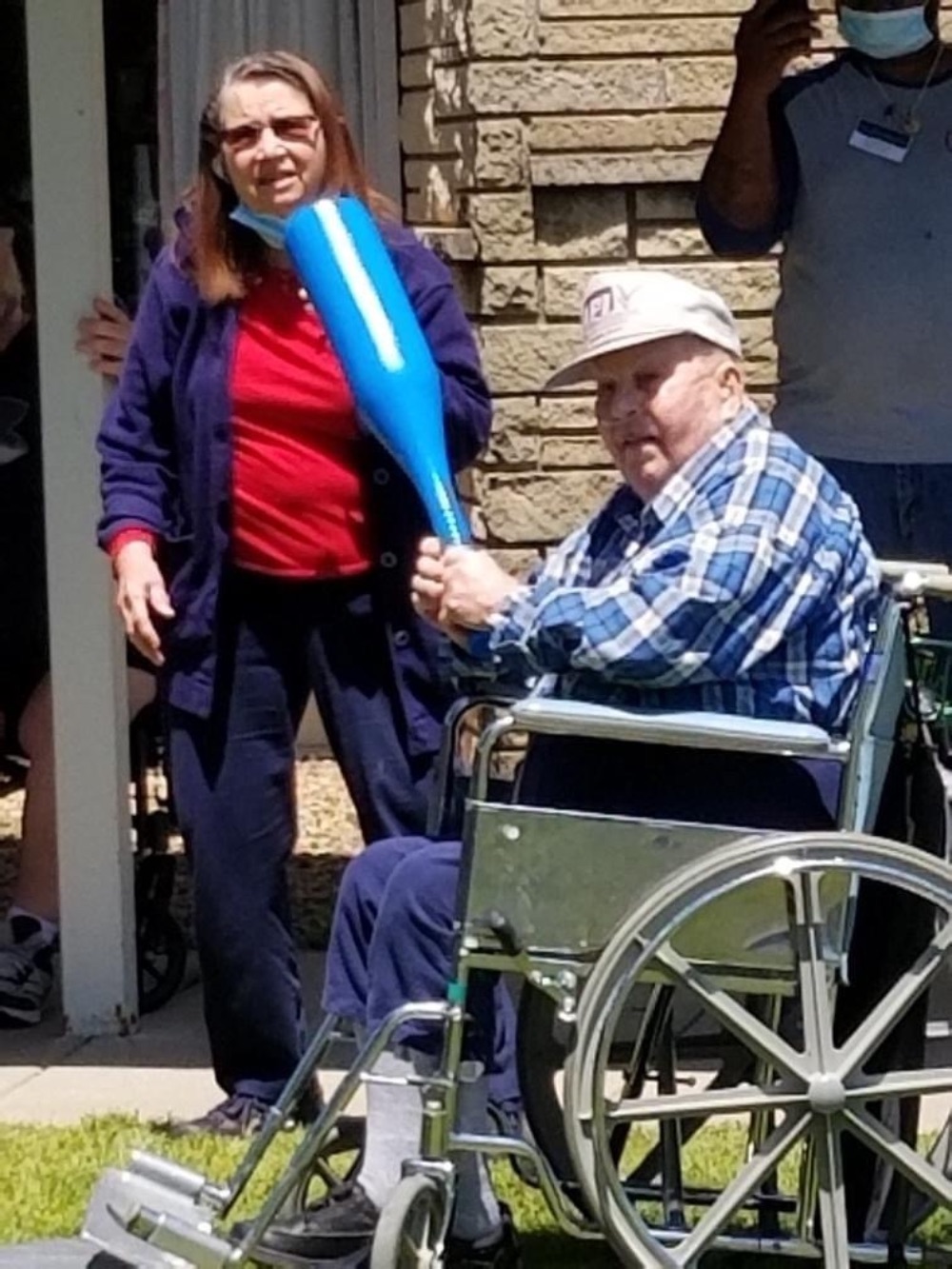