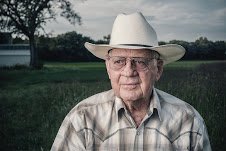 Patrick H. Sauble, age 98 died December 7, 2019, at the Presbyterian Manor in Newton, KS.  He was born August 15, 1921, in Newton to John C. Sauble and Hildred Jeffers.  He had one sister Rebecca Taylor and a step-mother Frankie Mead.  Pat was a lifetime Chase County rancher and farmer.  He is survived by his children David (Barbara Walker) Sauble, Ann (Galen) Carpenter and Susan (Dennis) Hague; five grandchildren; 13 great-grandchildren, brother in law Joe Loriaux and long-time friend Dutch Schultz.  Pat graduated from Newton High School in the class of 1939 and attended Kansas State University before entering the United States Army Air Corps in 1942.  He met and married Mary Palmer and they were together for 65 years.  Pat was very civic-minded.  He served on the Cedar Point School Board, first president of the Kansas Watershed Association, a member of the Neosho Basin Advisory Committee, a member of the Chase County Conservation District from 1955 to 2012, a 70-year member of the Kansas Livestock Association, 75 years as a Mason and Shriner, member of the John McKay Post 308 American Legion, Beta Theta Pi Fraternity at Kansas State and instrumental in getting the Old Mill in Cedar Point on the National Historic Registry.  Patrick was proud of his pioneering ancestry in Chase County and continued to run the Sauble Ranch until his death.  The land was homesteaded by his grandfather in 1856.  He will be remembered for his zest for life and the multitude of (mostly true) stories that he has passed on to family and friends.  His family will gather with friends on Saturday, December 28, 2019, from 5-7 p.m. at Yazel-Megli-Zeiner Funeral Home, Marion.  His funeral service will be held at 1 p.m. on Sunday, December 29, 2019, at Camp Wood YMCA Camp in Elmdale.  Pat will be laid to rest in Griffith Cemetery with military honors.  Memorial contributions in his name may be directed to the Florence American Legion, Pioneer Bluffs Foundation or the Cedar Point Mill Fund.  Please sign his online guestbook and leave a memory of Pat at www.ymzfh.com.

To order memorial trees or send flowers to the family in memory of Patrick Henry Sauble, please visit our flower store.