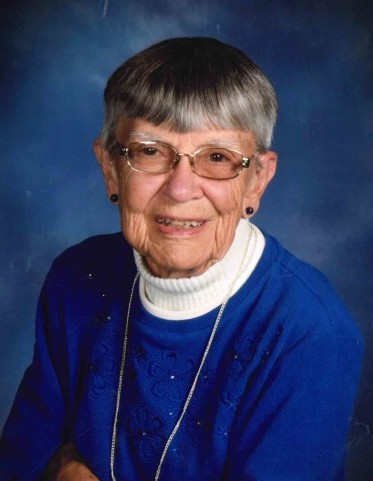 Pauline Cornella Thierstein was born on December 14, 1928, to Christian (C.B.) and Ella (Regier) Thierstein at Bethel Deaconess Hospital, Newton, Kansas.  She was the oldest child, with three brothers.  After a short illness, Pauline passed away on March 28, 2019, at Newton Medical Center, with family in attendance.

Pauline grew up on the family farm, 1 ½ miles east of Whitewater.  On the night of Sunday, June 8, 1941, a tornado destroyed the farm, killing her 5-month-old brother, Myron, and injuring her parents.  The family moved to another farm two miles farther east, and Pauline lived there until she left for college.  Pauline attended school in Brainerd, Whitewater, and the Bethel College Academy.  She graduated from Whitewater High School in 1947.

Pauline attended Bethel College, North Newton, for three years.  While there, she met Novalis “Nick” Toews.  They were married on July 25, 1950, at Emmaus Church in rural Whitewater.  The couple was blessed with four children – Stewart, Marna, Cynthia, and Jeff.  After several years living in Hutchinson, they moved to their farm, southeast of Whitewater.  Stewart was killed in a farm accident in 1955.  Both Pauline and Nick carried their grief for the rest of their lives.  Pauline was a homemaker for a number of years.  She enjoyed sewing and counted cross-stitch.  Sunsets were enjoyable, but she truly loved sunrises.

After deciding to go back to school, Pauline entered Wichita State University, receiving her Bachelor of Arts and teaching certification in 1968.  Her educational path was not finished with that degree.  She received her Masters of Science degree from Emporia State University in 1974, and her Specialist in Education degree in 1981, from Wichita State University.  Pauline started her career in education by teaching several local special education students.  She was the only Kindergarten teacher for the Remington School District, for 8 years, driving back and forth from Potwin to Whitewater.  Pauline became a school psychologist for the Butler County Cooperative after graduating from Emporia State.  Working throughout Butler County, Pauline touched the lives of many students and their families.

Pauline retired, for the first time, in 1994.  She was called back as a part-time school psychologist for a few years.  After retiring for the second time, she spent time as a substitute teacher for the Remington School District.

Pauline was very active outside of the home.  Most notably, she was a member of Kappa Delta Pi and Delta Kappa Gamma sororities, serving both as President of the local chapters.  She belonged to the Council for Exceptional Children and the Division for Early Childhood (DEC).  She served on the National Executive Board of DEC as Treasurer and in the Kansas Division as State President.  She was the Kansas State President of the Kansas-Elementary, Kindergarten, Nursery Educators.  Pauline was a Life Member of the National Education Association and Kansas-National Education Association.  Pauline spent a number of years on the Board of Directors of Bethel Deaconess Hospital and Newton Medical Center, helping oversee the construction and operation of the current facility.  She was a member of the Board of Directors for Kidron-Bethel Village.  When her children became active in 4-H, Pauline followed as one of the North Butler club leaders.

During Pauline’s retirement years, she stayed active.  She would take daily walks of a mile or more unless the weather was particularly nasty.  She enjoyed sewing and made numerous counted cross-stitch projects, including a number of bedspreads.  The projects that she was most proud of, however, were the birth announcements that she cross-stitched for the births of her great-grandchildren.  She would pester her grandchildren for a name, weight, and sex of each great-grandchild until the birth.  Pauline read books and magazines of all kinds.  After Nick’s death on June 20, 2015, Pauline remained on the farm.  She would “make the rounds” to visit her children, typically on Sunday afternoons and evenings.  After a bad fall and an illness in early 2018, Pauline elected to move to Wheat State Manor in Whitewater.  She stayed busy with walks through the halls, reading, playing Bingo, and leafing through her Facebook account to find out what the family was up to, especially the grandchildren and great-grandchildren.

To order memorial trees or send flowers to the family in memory of Pauline Toews, please visit our flower store.