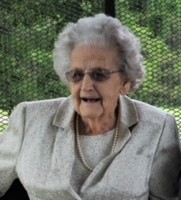 Pearly’s life began on December 28, 1924, the daughter of Dent and Mary (Sparks) Watson in Mossville, Arkansas. She married Arnold Edgmon on December 22, 1940, also in Mossville. She worked at Dole Packing Plant making the bacon! Pearl enjoyed quilting and was a member of the East Side Christian Union Church in Springdale, Arkansas until moving to Whitewater in 2002.

She was preceded in death by her parents; husband, Arnold in 2001; son, Bill Edgmon, brothers, Virgil, Elmer, Cecil and Ray Watson; sisters, Ethyleen Johnson and Lola Porter. Pearly passed away peacefully on Wednesday, September 23, 2020, at the age of 95 years old.

Her family will gather with friends on Sunday, September 27, from 1-3 pm, at Lamb Funeral Home, 120 S. Main, Whitewater. She will be laid to rest on Monday, September 28, at 11:00 am in the Fairview Memorial Gardens Cemetery in Fayetteville, Arkansas.

Memorial contributions may be directed to the Whitewater Fire Department in care of Lamb Funeral Home, P.O. Box 358, Whitewater, Kansas 67154. Please sign her online guest book and leave a memory of Pearly at www.ymzfh.com

To order memorial trees or send flowers to the family in memory of Pearly Lee Edgmon, please visit our flower store.