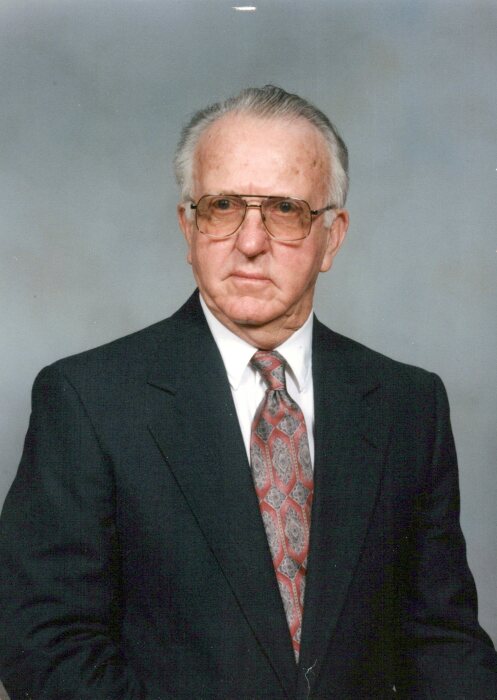 Gene's life began on October 26, 1925 in Lewistown, MT.  He was the son of LeClair William Winfield Obee and Ora Elizabeth (Oursler) Obee.  Gene was a 1942 graduate of Burns High School and attended the University of Kansas.  He served his country proudly during World War II from November of 1943 until November of 1945 and was a POW. He was united in marriage to the former Marie Melson of April 4, 1948 in Burns.  Gene was in business with his father, and brother with he and his brother working together 29 years.  He later worked for the Burns Co-Op and Walton.  Gene attended the Burns Community Church (formerly the United Methodist Church), belonged to the American Legion and the 99 Division Association, and supported the POW/MIA organization.  He was also the long-time caretaker and record keeper of the Burns Cemetery and very involved in the Burns community.  His greatest joy was his family which includes his children Donald (Cindy) Obee of Emporia, and Cheryl (Stanley) Smith of Emporia; grandchildren Chad (Danielle) Smith, Kristi Smith, Traci (Joe) Hekele, Erin (Henry) Volante, and Landon (Jenny) Obee; twelve grandchildren, "bonus" daughter Phoebe Janzen and several nieces and nephews.  Gene passed away on April 1, 2021 at NMC Health in Newton.  He is preceded in death by his parents, his wife Marie, daughter in law Dayla, brothers Frederick and Hugh and sisters Dorothy Smith and Ruth Ott.  His family will gather with friends on Thursday from 5-7 p.m. at the Burns Community Church where his funeral service will be held at 11 a.m. on Friday led by Pastors Steve Hysom and Jim Helzer.  Gene will be laid to rest in the cemetery he lovingly cared for following the service.  Memorial contributions in Gene's name may be directed to the Burns Community Church or the Burns Senior Center in care of the funeral home.  Yazel-Megli Funeral Home, Marion is serving the family.  Please sign his online guestbook and leave a memory of Gene at www.ymzfh.com.

To order memorial trees or send flowers to the family in memory of R. "Gene" Eugene Obee, please visit our flower store.