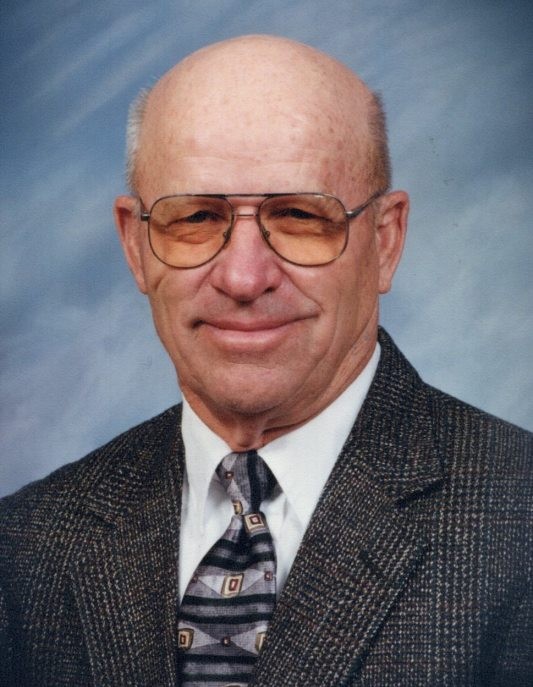 Reed Emerson Garrett, age 89, of Woodbine, Kansas, entered his heavenly home on June 16, 2018.  He was born on January 10, 1929, to George Raymond  and Olive (Oesterreich) Garrett at the family home near Woodbine, Kansas.

Reed attended Woodbine Grade School and graduated from Woodbine High School in 1946.  After graduation he worked for the state highway department, worked for his Uncle Phil one summer, and helped his father with farming.

Reed got drafted into the navy on October 15, 1951.  He went to San Diego, CA, for Boot Camp.  He worked on a VR 2 Squadron airplane, a sea plane, that flew from Alameda, CA, to Hawaii.  Reed also worked temporary additional duty at the hospital as a clerk in Alameda, CA.  From Alameda he worked on the USS Corson out of San Diego.  It was a fuel ship that went out once a month.

Reed married Marjory S. Bridgeman on June 29, 1952, in Abbyville, Kansas.  The couple left for California where Reed continued to serve in the navy until 1954 whereupon he returned home back to Kansas and worked at the local grain elevator in Woodbine.  The couple moved to Oregon in 1955 and resided there for about 15 months while Reed worked in a lumber mill.  Then they returned to Kansas to farm for Lowell Middleton from 1956 to 1958.

Reed and Marge had three children:  twin girls Roann and Rosann born in 1956 and daughter Jenise born in 1961.  The family moved from the Middleton farm into Woodbine in 1959.  Reed worked for the Woodbine Cooperative Telephone Company in the 1960's for Loretta Langvardt and later Hazel Henricks.  Reed started working as the school custodian in Woodbine in 1959, drove a bus, and farmed on the side.  He worked for the school until it closed in 1974.  Then he bought more land, farmed, and raised cattle.

Reed will be remembered for his hobby of collecting antique Oliver tractors and memorabilia as well as his love for his family.

Reed was preceded in death by his wife, Marge, and parents Ray and Olive Garrett.

Memorial gifts may be given to Woodbine United Methodist Church or Hospice of Dickinson County  in care of Zeiner Funeral Home, 404 S Broadway, Herington, KS 67449.

To order memorial trees or send flowers to the family in memory of Reed E. Garrett, please visit our flower store.