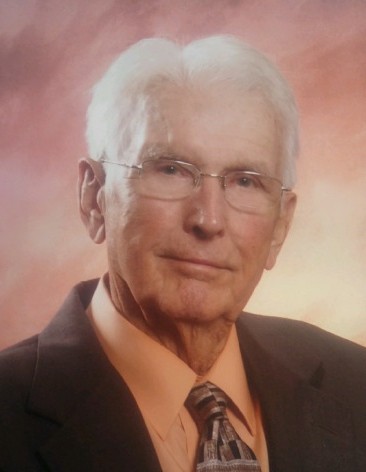 Reuben Kenneth Zerger was born January 29, 1922, to Benjamin and Mary Krehbiel Zerger, in Moundridge, Kansas.  He received his elementary education at the District 85 Volunteer School and graduated from Moundridge High School in 1939.  He went on to attend Bethel College in Newton, Kansas for two years.

On September 7, 1944, he married Eleanor Mae Voth.  Reuben and Eleanor were blessed with three children. They were married for 63 years.

After attending Bethel College, Reuben began farming in the Moundridge, Kansas area. He later started his career as a building contractor which lasted for 53 years.  Reuben and his wife, Eleanor, joined the Marion Presbyterian Church in 1950 where they were active members for 47 years.

Reuben’s life was marked by community service including Boy Scouts, Habitat for Humanity and Marion School Board.  Reuben had a passion for singing and the art of music, and he loved sharing his voice with others. Reuben was an avid fisherman, gardener and loved spending time outdoors.

Reuben was a constant source of encouragement and his example of Christian devotion will be remembered by many of those who have known him.

Reuben passed away on Thursday, July 17, 2018 at the age of 96.  He was preceded in death by his wife, Eleanor; his daughter, Roxanne; four brothers, Robert, Melvin, James and Ben; three sisters, Ellen, Anne and Luella; and, his parents.  He is survived by one son, Timothy and his wife, Chris of Bend, Oregon; one daughter, Julie Zerger Carr and her husband Steve of Livingston, Texas; one son-in-law, Edmundo Balcacer of Richmond, Missouri; five granddaughters, one grandson and six great-grandchildren. He is also survived by one brother, Ted, and two sisters, Kathleen and Carol.

To order memorial trees or send flowers to the family in memory of Reuben Kenneth Zerger, please visit our flower store.